I have always enjoyed listening to those people I know who still use out local dialect quite naturally. And having been brought up in the area around Howden I too still use some dialect expressions myself - although unless someone tells you that you are doing so how do you know?

One expression commonly used in our family is  'all taffled up' when describing maybe a ball of string or recently the heap of cable and Christmas lights we had pulled out of a cardboard box. It is a version of tangled up and is apparently peculiar to Yorkshire. I am not sure even if  it is only used in East Yorkshire.

Another discussion I had recently, after looking at the weather,  was about words meaning raining. I said 'it's teeming down' which I do not think is East Yorkshire dialect but then someone else used the phrase 'siling down' which I think is.

A sile is  derived from the Scandinavian word for a sieve and a local farmer's wife once told me that it was used of a particular type of sieve in a dairy where the milk ran straight through - hence it's raining heavily.

I could probably think of many more but here are just  a few phrases and words which I know, some of which are from my childhood but many of which I have heard used in the last few months - can you add any more?

that fire is up to the galleybokes [one of my father's from Driffield, describing a fire piled with coal almost up to the gallows balk, which was what a hook hung on and from which a pot hung]

it's wick - meaning alive, often with fleas although a visitor once asked me if a particular cable was wick [live - ie had power through it]

goodies - sweets, although people from West Yorkshire often refer instead to 'spice'

I will finish with what is supposedly a true story about Yorkshire road and rail signs. I will leave readers to check how true it is!

Several road signs had to be changed after Yorkshire people were  very confused by those at bridges and rail crossings which read 'Do not cross while lights are flashing'. Locally the word 'while' means until - e.g. 'wait there while I come back'.

Meanwhile I will take Molly out for a walk across the claggy field, returning all clarty having walked through countless slop holes but grateful that at least it is now a cockstride lighter.
Posted by Susan Butler at Wednesday, December 26, 2012 No comments:

Email ThisBlogThis!Share to TwitterShare to FacebookShare to Pinterest
Labels: dialect

It seems appropriate as we approach Christmas to have a look back at how the season was celebrated locally in times past. We are at present having wet weather but it is not too cold.

However in December 1878 the York Herald reported that it was well below freezing and the rivers were frozen. It is interesting in these days of a long Christmas break to read that on Christmas Day the businesses were closed - which suggests that they were probably open on all other days. The report begins with what was happening in York and then moves to Goole and Howden.

"Those who have sighed for a 'good old-fashioned' Christmas have at length had their wishes realised to the full, for the weather is of a more severe character than any that has been experienced for many years.

In York Christmas Day was observed in the orthodox fashion, the various places of business being closed, and services held in the different churches and chapels.

The hallowed day was ushered in by a gladdening peal on the Minster bells, and as soon as the day was fairly born the waits awoke the stillness by their carols and hymns. The Ouse and Foss being frozen, hundreds indulged in the exhilarating and healthy exercise of skating, of which for several seasons they have been deprived.

The inmates of the York Union Workhouse, numbering about 60 more than last year, were supplied with a substantial Christmas dinner, consisting of roast beef, potatoes, and plum pudding. To supply such a large number of appetites 67 stones of beef, 10 bushels of mashed potatoes, and 55 plum puddings, were called into requisition. The plum puddings were made up of 210lbs of currants, 70lbs of brown sugar, 40lbs of ground lump sugar, 120lbs of moist sugar, 13lbs of sultana raisins, 33lbs of lemon peel, and 60lbs of suet.

At tea, currant cakes, baked out of 20 stones of flour, were served up with as much of the "cup that cheers but not inebriates" as the inmates desired. Various parts of the house were decorated with evergreens and mottoes, and everything was done to render those to whom the institution afforded shelter from the cruel blast of poverty, contented and happy.

For the first time for several years, Christmas Day has come with the river blocked with ice, and with consequently a large number of men unemployed. The companies, in whose hands the steam trade of the port rests, have made strenuous efforts to keep the channel open, but the great block of ice in Goole Reach has baffled their efforts, and their steamers have had to return to Goole after a struggle of an exciting nature, in which the ice was the victor.

The river now presents a very picturesque appearance. Blocks of ice, stranded on the shoal sands, rise to a height of 10 or 12 feet out of the water, dotting the river for miles, while portions of the channel are covered with great sheets of ice closely heaped together, over some of which men and youths have crossed.

The Aire, the Dutch river (or Don), and the Derwent, are all blocked. On Christmas Day the thermometer was 22 deg., or ten below freezing, but until noon the weather was fine and bright. After that hour it clouded over and became very foggy. The parish church, which was very prettily decorated by the ladies of the parish, was well attended, the Christmas sermon being preached by the Rev. Dr. Bell, vicar of Goole.

At Snaith, Rawcliffe, Hook, Airmyn, and the other parishes round, the churches were suitably decorated. To meet the needs arising out of the distress, coals were distributed on Christmas eve, and on Wednesday, at the Market Hall, there was a soup boiling, tickets being given by the committee to those persons suffering from the present stagnation of trade or by the frost.

At the workhouse the usual treat was provided for the inmates by the Guardians, and a number of ladies and gentlemen attended to assist. The guardians present were Mr Huntington, Mr Bromley, and Mr Gleadow, and, notwithstanding the extra number of inmates, the house being full, there was enough and to spare. The visitors included Mrs and the Misses Wells, of Boothferry House, the Rev. T. Dickin, &c. At the close the usual speeches were made, and a very pleasant afternoon was passed.

The usual services were held at Howden Church, which was tastefully decorated, and a service was also held in connection with the Wesleyan body. The inmates of the workhouse had their accustomed treat in the shape of a dinner of roast beef and plum pudding, with other little luxuries for the inmates after dinner. The ice was the centre of attraction in tbe afternoon, and skating was indulged in by a great number of people both down the Selby-road and at the Kilpin Brick-yards."


A later newspaper report comes from the Hull Mail in 1936:

"Goole spent a cheerful Christmas, reflecting the recent improvement in trade of the port, and family parties, football and dancing were the chief attractions.

The aged, the sick, and the poor were not forgotten, and there were the usual festivities at the hospitals and institutions. The Mayor and Mayoress (Alderman and Mrs S. G. Bevan), with a number of other guests, attended the Christmas dinner at the Poor Law Institution, where an original note had been struck in the decorative scheme, the dining hall being bedecked to represent a cruise on an ocean liner.

At the Bartholomew Hospital, each patient received a present and was allowed two visitors to tea. The Mayor and Mayoress toured the wards, and Father Christmas (Dr. K. Barrett) handed gifts from the Christmas tree to the patients and visitors. In the evening Mr H. Dodson entertained with his piano accordion, and on Boxing Day a cinematograph show was given by Mr H. Kay.

Nearly 300 poor children of the town were present at the annual Christmas Day breakfast organised by Carlisle Terrace Church Christian Endeavour Society. The Mayor and Mayoress also attended this effort, and Mr Sam Lister, acting as Father Christmas, distributed toys and sweets to the boys and girls."

I hope all readers of this blog have a merry Christmas and enjoy their Christmas dinner. I hope too that the rivers are not frozen and the weather clement!
Posted by Susan Butler at Tuesday, December 18, 2012 No comments: 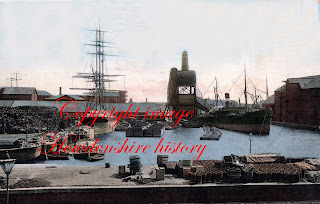 Here is a picture of a hoist in action in Goole docks. Was it ever called a pepper pot?
Posted by Susan Butler at Tuesday, December 04, 2012 No comments: