Death of the queen

When I began to write this post I had watched the Queen, frail but bright welcoming our new prime Minister. Then came the shocking news of her death only two days later. I think it will take some time for the news to sink in. Like so many I can only ever remember there being a Queen - indeed my middle name is Elizabeth. It is a strange time.

I am already in fact quite late in writing this post -  I seem to have missed a month but have a good excuse as after managing to avoid Covid all this time I got it and have found it  more debilitating than I thought. Certainly more than a slight cold. I was very sorry to miss most of the Goole History group exhibition at the Junction in Goole as it was our first one for over two years and it's always nice to talk to people about the local history of the area.

The garden was, like everybody's, very dry but here in East Yorkshire we have had some heavy downpours recently and the grass is beginning to green up. My chickens, which I got as very young birds, will hardly know what to do when we do get rain but will, I hope, enjoy it when the weeds in their pen start to grow!

But  I  am now looking forward to the various history groups I go to in Goole and Skelton restarting after the summer break. Our first Thursday morning in Goole [22nd September] will be a chance for everyone to talk about their various summer projects whilst at Skelton [ 3rd October] we are beginning with a talk on Holme on Spalding Moor. Anyone interested in these groups is welcome to  send me a message through my website Howdenshirehistory.co.uk.

One of my own recent projects has been having a look at local mills. I have always been interested and someone on a local facebook page mentioned the mill at Goole Fields. I wrote a blog post about it many years ago - it was a tower mill known as Birks' mill and replaced  a smock mill which stood on the river bank.

Almost every village had its own mill and as it is so flat here it was ideally suited for windmills. Many initially were post mills but they were prone to blowing over.

I found a piece in the Hull newspaper after a terrible storm in January 1839.

HOWDEN. One the pinnacles fell from the ruins the Collegiate Church ; some large pieces of lead were blown off the church roof; the streets were strewed with fragments of chimney-pots. In the country, we are sorry to learn, consequences more disastrous have been experienced. At Breighton, six barns were blown down, and one man bad his thigh broken, and another his leg fractured. Two barns were also blown down at Kilpin. The lofty chimney, belonging Mr. Ward's tannery, of Kilpinpike, fell down. The Hail Mill, near Howden, occupied by Mr. David Morritt, was blown down, and also two, others at Barmby. We are sorry to hear that seventeen mills have been blown down within ten miles of Howden. About forty or fifty large trees were blown down in the grounds of P. Saltmarshe, Esq. and the neighbourhood.

I tried to work out where these seventeen mills were and wished they had been named.  Several post mills were replaced by tower mills and some of these do survive, some converted in houses  [Heron's, Goole Fields and even a cafe [ Timms']. I have been trying to find pictures of some of them but sometimes all that remains is a name - Mill house or Mill lane.

I am presently on the trail of a postmill which stood in the south field of Hook in 1834. I have found it on an 1852 OS map [thanks  to my friends P and P] and think the site was under what is now the Hook railway bridge.

I have collected many pictures of tower mills but this one of Flatfield Mill at Howden is one of the few post mill pictures I have.

And appropriately I was listening to the radio yesterday and there was an interview with a volunteer at Holgate Mill in York. He was explaining how there was a language of mill sails.   And how to leave the sails just past vertical was a sign of mourning- which they were going to do.  Although both the pictures I have put on here seem to have sails in that position! 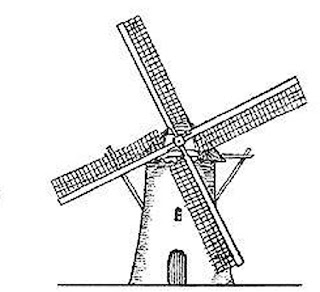 Posted by Susan Butler at Monday, September 12, 2022 No comments: