It's definitely autumn now and although the leaves are still on there have been one of two slight frosts. We have planted some garlic in one of the raised beds and hope it gets going before winter.

It has been a busy few weeks but now it is colder and darker it's time to return to local history. I have been busy looking at an interesting family the Robinsons, who lived at Ousethorpe near Eastrington in the early nineteenth century.  Most of the family stayed in the local area but George, born in 1788, moved to Leeds and became a very prosperous linen cloth manufacturer. When he died he left land in the fields around Eastrington to his nephews. I found his marriage in 1814 to a lady called Mary Spicer from Hessle. One of the witnesses to their wedding was Richard Oastler. He was a prominent and famous industrialist and reformer.

Completely unconnected has been some interesting research, carried out by Pauline Stainton, a Goole local historian on a Goole family, the Ramsbottoms.

They had built the fine three storey warehouse at the Boothferry Road end of Carter Street, probably in the 1890s.

Incorporated into the front elevation are the words ‘Ramsbottom Brothers Wholesale Grocers’. The history group had always wondered exactly who these brothers were and what happened to them. 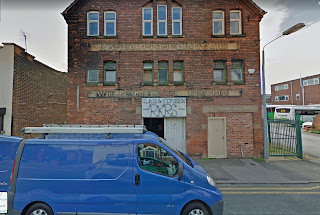 'On the 20th of May, 1850, Thomas Ramsbottom married Martha Midgeley in Snaith Church.  Their address is given as Goole and Thomas’ occupation as a sugar refiner. The 1851 census gives their address as South Street and Thomas is still at the sugar refinery.

The Ramsbottoms had four children. William was born in 1850, Thomas in 1856, Arthur in 1858 and Annie in 1867. The three youngest children were baptised in the Free Methodist Church in St. John St. Annie sadly died before her first birthday.

The eldest son William left Goole  between 1871 and 1881 and spent the rest of his life as a hotel porter, largely at The Grand in Scarborough.

Thomas died on the 22nd of February 1882 and left everything to his wife Martha. Martha died in 1900 and is buried with her husband in Goole cemetery.

By 1891, Thomas jnr and family were living at 62 Boothferry Road and his brother Arthur, who never married, was living with his mother Martha in Jefferson Street.  According to newspaper advertisements,  Thomas and Arthur were now trading as Ramsbottom Brothers and had businesses on Boothferry Road and in Bridge Street  in the 1880s and 1890s.

This was when what was known as the Potter Grange estate  - ie the streets off Boothferry Road including Carter Street, were being built. It seems that this would be when the warehouse was also built.

But business did not go well and in 1895 Thomas was declared bankrupt.

Arthur Ramsbottom died in 1918 at the Kirkburton Mental Hospital and is buried there.  Thomas was mentioned in his will as a commercial clerk.

Thomas Ramsbottom died at 44 Pasture Road Goole on the 29th of November 1921.'

Whether they continued to use the warehouse is unknown as Arthur was never declared bankrupt and was throughout described as a grocer. It has had many different uses over the years.

Life for the Ramsbottom brothers did not go smoothly. In 1908 there was a scandal concerning Thomas and Laura's daughter Martha.

In September 1908 the  Lloyds weekly newspaper reported the case of the Leeds Bigamist as follows.

A man of forty-two, John Binns, tailor, who was said to have been a local preacher, was committed for trial from Leeds Police Court on Tuesday on a charge of bigamy. Albert Henry Coleman, of Trafalgar-street, Sheffield, a caretaker for Church schools, said he was present on December 17th, 1907, at St. Jude's Church, Eldon, Sheffield, when the prisoner was married to Annie Ramsbottom. He now produced a copy of the marriage certificate. Annie Ramsbottom, of Weatherill street, Goole. said she made the acquaintance of the prisoner three years ago at Goole. He came to lodge with her parents. She knew he was a married man. He several times stayed the week-ends with them when he visited Goole. Last December she went through a form of marriage with the prisoner at Sheffield in consequence of her condition. At the time she knew he was a married man, and that his wife was living. Thomas Perkins, of 54, Burley street, said he knew the prisoner and his wife. and was present at the wedding at the parish church on October 18th, 1885. Bail was refused.

On Wednesday, John Binns described as labourer, of Leeds, was summoned by Martha Annie Ramsbottom,  of Weatherill St , Goole in respect of a female child born on January17th. Complainant's father, grocer, said the  girl was away for about two years, and he was not aware of her whereabouts until received a telegram from Sheffield asking him to fetch her home. He went over and found she was living with the defendant. The Bench made an order for payment 1s 6d per week, with the costs.  In connection with the case, is recalled that  while out bail awaiting his trial for having gone through a marriage ceremony with Ramsbottom, having at the time a wife living some time ago fulfilled a prcaching engagement at Goole, afterwards eloping with the girl. Binns did not appear at the Court  on Wednesdav, and it is interesting  to note that a hat and coat were found on the river bank, with the latter being a note: signed requesting that the articles should taken an address. We understand address is the residence of the girl Ramsbottom's parents. The police not for one moment imagine that Binns has made away with himself.

And finally on 17th November 1908 the Sheffield Telegraph reported

The West Riding Assizes were resumed at Leeds, yesterday, Mr. Justice Pickford sitting in the Crown Court. John Binns (43), tailor, was indicted for feloniously marrying Annie Ramsbottom, on December 7, 1907, at Sheffield, Harriet Binns, his former wife, to whom he was married on October 18, 1885, being then alive. When the case was called, however, the accused failed to appear. Mr. G. G. Alexander,, who had been instructed for the prosecution, said Binns was committed for trial at Leeds. He was afterwards allowed bail, and subsequently a summons in respect an affiliation order was issued against him, and was to have been heard Goole on October 14 last. On that day a man's coat and hat were found on the bank of the river at Goole, and in a notebook, in the pocket were found three letters of farewell addressed from to his mother, his wife, and the second woman he had married. Since that date the man had been neither seen nor heard of, and counsel submitted that it was for the sureties give some proof of Binns’ death. John Low and Richard T. Calvert, the sureties, were then called, and, in reply his Lordahip, stated that they did not know Binns, but went bail for him because they were acquainted with his mother. They did not know whether he was dead or alive. His Lordship said would do nothing in the way of estreating the recognisances, but would let the matter stand over for the present. the meantime, he would issue warrant for the arrest of Binns.

I have found no further reports but in the 1911 census Martha is living with her parents and three year old Annie.