Howden and the Old Derwent.

On Monday evening I went to a meeting about the proposed archaeological dig on the land behind the present Heritage Centre, formerly the HSBC bank.

During the presentation there was some discussion about the route of the Old River Derwent . It has long been a topic of interest amongst local people as the course of the river has changed frequently over the centuries.

All these reference points are watercourses and it is interesting that even then there was a Derwent and an Old Derwent. But very confusingly what we know today as the Old Derwent is probably what was in 959 just the Derwent!!

What we do know is that here in Howden there is a watercourse now called the Old Derwent running through the town. In fact it is probable that it was its existence that decided the first Anglo Saxon settlers to build their village along its banks. Hailgate was built alongside the river which is why it curves gently [it takes its name from halh meaning bend].
The river was bridged at three places in Howden - so we had High Bridge, Halebrigg [bridge]  and another somewhere on Pinfold Street/ Bridge gate. The river was then 6 feet deep and 12 feet wide.

The Manor House of the bishops of Durham was built a few metres from the bank of the river and bishops, princes, kings and queens travelled in barges along Ouse and then along the Derwent to Howden.

By 1399 a 'New Derwent'  had been cut - we now call it Howden Dyke - and boats could access Howden  from the Ouse, turning off at Dykesmynn [ myn means mouth].

Sadly after the Reformation the bishops lost their wealth and both the church and the Manor House fell into decay.

After the "New Derwent' was cut parts of the river silted up and gradually the Derwent took the course we know today. The Old Derwent  through Howden became more of a drain. It  was also used as a watersource - and as a public sewer and still runs underneath parts of Hailgate as well as alongside The Ashes.

So fast forward to the nineteenth century when I found this reference in the Leeds Times newspaper.
of 23rd March 1867.

The Town of Howden, in Yorkshire, has been for some time past suffering from a severe visitation of fever, caused, it is supposed, by the unclean state of the Old Derwent, which is used as a public drain.

The Wesleyan Day School, which abuts on the sewer, has been closed in consequence of the epidemic. Mr. Fielding, the master of the school, and a number of the pupils have died, and a great portion of the remainder suffered severely,  one medical man having no fewer than thirtyseven cases under his care at one time.

It is expected the inhabitants will take steps to remove the cause of the outbreak, which, if they do not, will doubtless be aggravated during the summer.

On Tuesday a purse of ten sovereigns was presented to Isaac Winter, the driver of the railway omnibus. Winter has lost his eldest daughter from fever, and the remainder of his children having also suffered from the same complaint, the money was subscribed by a number of the inhabitants as a mark of their sympathy with him in his bereavement.

The Wesleyan school was at the end of Flatgate and after its closure was for many years used as a garage. I looked up Mr Richard Fielding, the master who died. He was 40 years old and left a wife and family. He had only been at Howden for three years, coming from a job at Tollerton.

Newspapers record many other problems with the Old Derwent and I believe it is still a bone of contention as to who is responsible for it. Meanwhile tales abound - the boat dug up near Elizabeth Homes when 'deep drainage' was put in,  a similar tale of a staithe  being revealed in the Market Place, the salmon seen by drinkers at the Cross Keys.
Anyone know any more? 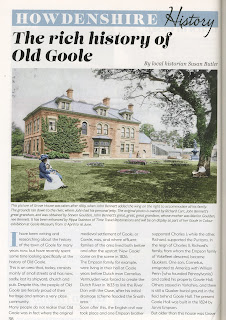 Posted by Susan Butler at Wednesday, April 11, 2018 No comments: