It has been a few days since I wrote anything here on my blog. Blame the lovely weather as I have been out in the garden tidying up and cleaning out my pond.

Maybe three years ago we saw some bulrush roots [variously bullrush or reed mace] which had been cleaned out from a local dyke. Thinking a few bulrushes would look nice in our pond we planted them. At first nothing happened but last year they grew and produced magnificent 6 foot spikes - although not where we had put them. The rhizomes had obviously floated across the pond and rooted near the outlet from the drain from the house roof.

This year small green shoots are coming up everywhere and I have been digging them out whilst standing in the water. Molly, the Labrador puppy thinks this is great and runs around playing with the snake-like roots. At least though we do have water in the pond unlike many areas. I hope we get some frogspawn.

The local history class which I teach in Howden on Monday afternoons has now 'broken up' for summer. We shall resume in September and would welcome new members. We spent a recent Monday afternoon in the church where Rev Little kindly gave of his time and knowledge to point out some of the interesting features of the building. He drew our attention in particular to the lovely west windows by the Brussels glass artist J B Capronnier.

Afterwards I went home and researched a little more about them.  Two, including the magnificent centre window were in memory of the Scholfield family of Sandhall.

But the third window, I found, was  erected in memory of George Tutill, a native of Howden who died in 1887 in Acton. Who was this man who could afford such a magnificent window?

Further research led me to George Tutill, flag makers who are still very much in business and gearing up to a very busy time for the Queen's jubilee. And yes - it was the same man who founded his business in 1837. He has an entry in the Dictionary of National Biography and although he left Howden as a boy he was buried  in 1887 in the churchyard here.

He made magnificent silk trade union and friendly society banners  in the nineteenth century and was himself prominent in the Foresters. I shall look at the window with even more interest in future.
Posted by Susan Butler at Thursday, March 29, 2012 No comments: 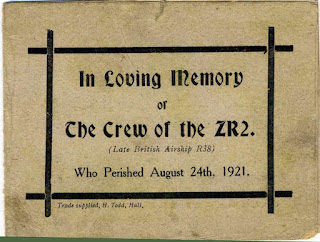 Yesterday I had a stall at the Goole hobbies exhibition. It was very busy and I met lots of people interested in local history. I had a screen linked to my laptop and had different folders of pictures on display. By far the most popular were those showing ships, docks and railways. Several of those watching scenes of launches of Goole ships had worked on building them and were able to add information. Many remembered the launch of the Arctic Freebooter, a stern trawler, in 1965. Apparently there was a problem and she listed badly after entering the water.

I was kept very busy answering queries as varied as how large was the Goole registration district, did I have any old photos of Adlingfleet [only of the church] and when was the present Howden market cross erected [1909].

Today I have been sending off digital images of old photos which people ordered yesterday.
I did however make time to take Molly for a walk although we seem to have returned to winter weather and there were white flakes in the rain. The field near where we walk has recently been ploughed and she finds it puzzling to have to slither up and down the furrows whereas before she could run freely.

We have had a pair of Mallards on the pond and the new brown hens are beginning to lay. My rose hedge is beginning to grow and the daffodils are flowering amidst the snowdrops. I know it is only the beginning of March but I am keen to begin gardening.
Posted by Susan Butler at Sunday, March 04, 2012 No comments: