The Patten family of Goole

This is a fairly brief piece in response to a facebook post. I prefer to write as blog posts as facebook posts tend to get submerged quite quickly  on the busy All about Goole page and also I know several Goole local historians at least do not 'do' facebook  and so cannot  read the interesting threads which come up.

A couple of weeks ago a post appeared asking where Abysinnia Terrace was in Goole. It came with a picture, to which I have added a little colour. 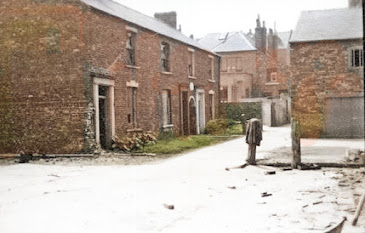 Abyssinia Terrace was behind Boothferry Road and stood where the Wesley Square development is today. In the background of the picture is the rear of quite a large building which fronted Boothferry Road adjacent to the old Goole Times building..  The query several people have asked is what was it? Members Chris and Dave have, with the aid of maps, identified it as a property called Westholme.

It stood back a little from the building which was once the Wesleyan manse [hence Wesley Square] and in later years had shops on the front of it such as Clarksons and then the Lyceum cafe. At some point, as yet unknown, it was demolished and the YEB showrooms stood on the site.

The picture below shows it standing back next to the Goole Times building. 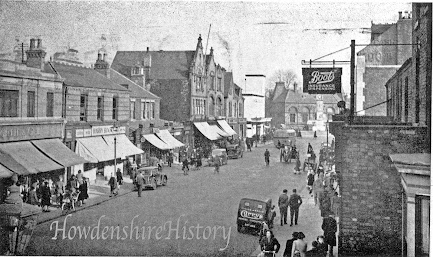 I have found a little bit about the house in earlier years. It was the home of Mrs Mary Ann Patten and was for a time run as a school by her daughters.

Mrs Patten, who died in 1895 at Westholme, was born Mary Ann Duckels and was the widow of Henry Dalton Patten. Mary Ann came from a long established Goole family and her father Thomas owned the North Street brewery. She was his only child and when he died she became the owner of the brewery. She married her father's brewer, Henry Dalton Patten in 1852 and they had a family of 5 daughters.
But sadly Henry drowned in the docks in 1864 leaving Mary Ann to bring up  Mary, Minnie, Emily, Kate,  and Edith.  She sold the brewery around 1877 and by 1881 the family were living in Boothferry Road and taking young lady boarders.  The daughters who were not teaching in Goole worked as governesses.
Minnie died in late 1895 in a London hospital but the school advertised  in 1896.  Presumably at some point the remaining daughters sold the property.
The Patten sisters later lived at 9 Clifton Gardens and when the last, Emily, died in 1941 aged 82 she left  over £5000 and an interesting will.
After certain family bequests, she left £300 to the vicar of Goole for providing coal. etc.. for the aged poor, her residence to Sheffield Diocesan Trust for the use of the priest in-charge of St. Paul's Church. Goole; £250 each Arthur J. Weddall and Harold Weddall; £100 to May Robinson: £100 each to Rosamond M. Joseph and Lucy A. Marris: £50 each to Harry Raffles and Mabel Farrow; £20 to Robert A. Heptonstall: annuities of £26 10s each to Annie and Sarah Chantry, or an annuity of £53 to the survivor, and the remainder equally between the Church Missionary Society, the Society for the Propagation of the Gospel. the British and Foreign Bible Society, the Missionary Fund of the Girls' Friendly Society, the Royal United Kingdom Beneficent Association, the Church Army, Lord Roberts' Memorial Workshop's. Dr Barnardo's, and Goole Bartholomew Hospital.
Does anyone know any more of the Miss Pattens? Or more of Westholme?

The Delanoy family of Barmby and attempted murder at Saltmarshe

Since my last post we have had Easter, some lovely sunshine and also snow. I put my tomato plants out into the greenhouse and think they are surviving but shocked!! The snowdrop  flowers have now all died back but I try not to cut them until they have put the goodness back into the bulbs. I have a variety of daffodils and while some have finished flowering others are still in bud so the garden is still looking ok. I am looking forward to getting out a bit more and sitting in friends' gardens but it is still a bit cold.

I am keeping busy on the local history front and have been working on two family trees which I have enjoyed. But I am also adding pages to my website which I hope will go live soon as the existing one is very out of date.

One page is about the history of Barmby and I have just added a paragraph into it about the Delanoy family. The Delanoy family of Barmby were descendants of a Dutch family who came to England in the seventeenth century with Sir Cornelius Vermuyden who drained the Isle of Axholme

An Isaac Delanoy - sometimes written as De la Noy- married in 1649 at Sandtoft where there was a church for Protestants working on the drainage.

A branch of the Delanoy family had 'migrated' towards the Carlton/Drax area and then across the river to Barmby by the mid eighteenth century. They were farmers and there are several family graves in the Barmby churchyard.

One John Delanoy died in 1827. His son William was born in 1816 at Barmby. In 1850 he married Mary Marshall and their son William was born the following year. The family had settled in Doncaster where William became landlord of the Wood Street Hotel. He gave this up and became a currier and harness maker in Baxtergate. His son, also William, followed him in business initially and also became a prominent freemason. in Doncaster. In 1880 he wrote the story of St George's Lodge of which he was a member.

But by 1891 he  had moved to Egypt where he worked for the government and took a leading role in Egyptian freemasonry. In 1901 we read that

The King has granted unto Mr. William Delanoy authority to wear the Insignia the Fourth Class of the Imperial Order of the Medjidieh, conferred upon him by the Khedive of Egypt in recognition of valuable services rendered  to his Highness  by Mr Delanoy in his capacity of Director of Stores and Industries in the Prisons Department of the Egyptian Ministry of the Interior.

I am also working on a page about Saltmarshe. Although I have produced a small booklet about the village which visitors to the honey stall outside our house can buy there is nothing about the village on the website.

It always amazes me how such a small village had so many families who emigrated in the first half of the nineteenth century to Canada and the USA. I suppose that there were so many more opportunities there for young people than there were as farm workers in East Yorkshire. And of course with the internet their descendants can connect with  the 'home country'.

And I can write too about the fight of the ferrymen. One Saltmarshe ferryman man was charged with  attempted murder after he hit his rival's boat with an oar as they both tried to entice passengers into their boats. He was acquitted after the judge said if he had meant to murder the occupants of the other boat he could have done so quite easily!!

Finally I have included here a colourised old picture of Howden. Some views of Howden are appearing on e bay at the moment and I have a program too that will do this to my black and white old postcards.  But I am not quite sure what I think. It certainly brings the pictures to life but of course we can never be sure what colour clothes, shop fronts etc were a hundred years ago. The computer sometimes has some odd ideas

I think it's a matter of taste. 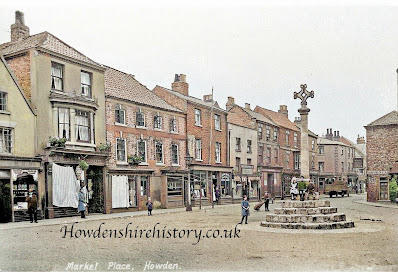