Today is Good Friday - and it's cold. Particularly cold here as we have very little oil and when I ordered more I was told that as the Easter weather forecast was so bad everyone had had the same idea and so we could not have a delivery until after Easter. So it's back to lighting the Rayburn and barrowing logs - I suppose we are lucky to have an alternative heat source.

Last night I went to a meeting of the Howden Heritage Centre committee. It is just a year since we opened and now the whole ground floor is ready for use. The display area is bigger, we have a meeting room, a workroom, an oral history room - and somewhere for volunteers to make tea! We are now looking at putting on some fund raising events and some talks.

One of the interesting projects is an archaeological dig in the back garden of the centre. This building was of course for many years a bank but back in medieval times it was probably part of the Bishop of Durham's Howden palace. The banqueting hall survives but the Bishop's Lodgings and private chapel were very near if not within the garden. We have permission to dig some trial trenches so looking forward to  seeing what's underneath. 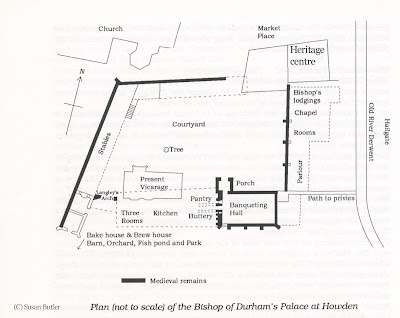 I expected to be writing today about the Goole Hobbies exhibition but last week we saw out the end of February with a blast of Siberian weather. So plans were thrown into disarray with a concert at Doncaster I was planning to attend cancelled, as was my Thursday morning history class and Saturday's annual hobbies exhibition in the Leisure Centre.

But compared with other parts of the country we got off lightly with about 6 inches [ in old money!!!] of snow at the most. Worse in fact were the biting winds from the east - we had to block up the extractor fan with cling film to stop the icy blast entering the kitchen. Today the snow here has almost gone but it is a cold rainy day. But on the positive side the snowdrops are visible again and the daffodils are springing back upright.

It seems some time since I wrote of rural, rather than historical events so here is a brief update. Our downstairs cloakroom light stopped working and we had to remove part of the ceiling to get at the wiring. Also removed was an old wasps' nest from some three years ago.

Here is a picture of it - and of the garden and Molly before and during the snow.