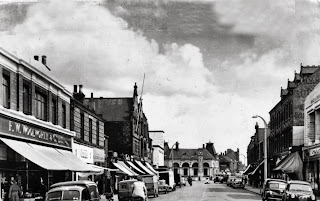 Family history at the Waterways Museum 2013

It has been a lovely sunny day for the May bank holiday and we went to Helmsley for the afternoon. The rest of the world was there too and it was difficult to park. But we managed, ate an icecream and I bought a secondhand book about the Maister family of Hull.

The garden is very dry and various seeds have yet to appear but the courgettes and tomatoes in the greenhouse are growing. Molly loves being outside but disgraced herself this morning by rolling in something indescribably smelly. She had to be shampooed and hosed down but at least we could wash her outside.

On Sunday we are going to have a stall at the family history day at the Waterways Museum in Goole. Last year was very quiet but we are hoping to see more people this year. We are taking lots of old photos to display and some CDs we have made of old pictures of Goole and area.
Posted by Susan Butler at Tuesday, May 07, 2013 No comments:

I have a friend who, like me, collects old pictures and postcards of the local area. She is also very skilled at adding colour to old photographs which brings them to life - you really do feel that you have stepped back in time.

But sometimes you  buy a postcard which is said to be somewhere in the local area around Goole or Howden and then have a problem identifying exactly where it is. It looks familiar - but where is it?

Below is one such picture. It should be so easy. The name over the shop is Lockwood and the style of the house is certainly popular in this area of Yorkshire.  It may even be a post office too but the sign is not clear.

We have searched for the name in the 1901 and 1911 census but no one called Lockwood comes up as a shopkeeper.  We wondered about a house in Bubwith main street which was once a shop but it is maybe not quite right.

So does anyone recognise this house? Is it your family standing outside?

Postscript  June 16th - we have identified where the picture was taken. It was in Belton in the Isle of Axholme.