Here we are in 2021 and I hope we can all look forward to a happy new year. What with more gloomy news on the pandemic and the shocking events in America it is time to be optimistic.

In the garden the snowdrops are coming up - everywhere I walk I can feel them underfoot and the daffodils too are a few inches high.

A recent post in a Howden facebook page mentioned Lumby Lane and the former Hull and Barnsley railway house there. The gentleman wrote of how his Uncle Arthur, who worked on the railway, lived there and how

We used to get off the bus at Longs Corner, and go into a field, just before the bridge, and walk by the side of the railway lines, (and find a big lump of coal and take it to uncle's house). They had no water, gas or electricity, water was delivered by a railway tender, and run into a big concrete tub, with a cover, and the water had to be filtered before drinking any; lighting was methylated spirits lamps, and the toilet, you dug a hole, in some land at the back of the house, and buried it.

This reminded me that some years ago I was asked to research the Lumby family after whom the lane is named. The lane is an ancient one and was part of the border with the Bishopsoil Common.  It  runs from Thorpe Road through to the Howden to Gilberdyke road. William Lumby was living in a cottage there when he made his will in 1842 and died in 1844. He was aged 81 and was described as being of New Fields.

But in the 1880s the lane was bisected by the new Hull and Barnsley railway which opened in 1885 and William Lumby's cottage ended up on the Belby side. The Lumby family were living there in 1861 but I am not sure who lived there later. I believe the house which stands back from the road and backs onto the lane may be the site of this cottage.

The Lumby name was fairly common in the area and so I think there is only a distant connection with a fascinating character I came across in my searches. This was one Francis Lumby who made his way into the newspapers in the summer of 1914  when he rode with his wife in a donkey cart from Howden to London.

Here is his story.

A journey from Howden to London, 190 miles, chiefly by donkey cart is not by any means an easy achievement, but it has recently been accomplished by Mr. Francis Lumby, a Howden worthy, who aspires to be a public orator and leader among his fellow working men.

Mr Lumbv conceived the idea of visiting London not only to see the  Metropolis, but also to gain inspiration by attending Labour meetings and conferring with trusted leaders. At the last East Riding County Council election, he had ambitions  to stand as candidate for Howden, and declared at a public meeting that if elected he would ride to the meeting of the Council at Beverley in his donkey cart. The proposed candidature did not materialise, but the idea of the journey to Beverley pales into insignificance beside his recent feat, which he accomplished about six days, the return journey, after a week end spent London, occupying a similar period.

Mr Lumby was accompanied by his wife, who rode with him in the cart, and during their progress southward they attracted considerable attention all along the route. He was surprised and embarrassed on reaching London find that even the constables on duty, not to mention other officials, knew of his coming, and were looking out for him.

The first Metropolitan policeman he saw knew his name, and congratulated him on his arrival. When he looked at the illustrated papers, there was his photograph.

A representative of The Yorkshire Evening Post" sought out Mr Lumby on his return home to Howden, after his adventurous journey, and found him busy working his potato plot, for the good man, it may be mentioned, is skilful in the art of husbandry.

Mr Lumby, now 61 years age, has all the vigour of one who followed out door occupations, said that Mrs. Lumby and himself set out their journey at four o'clock in the morning, and travelled 31 miles. The next day they travelled 28, and so on, making good journeys each day. The weather, however, turned very hot, and fifty miles from London Mrs Lumbv returned to Nottinghamshire, where she stayed until her husband's return. Mr. Lumby pushed on and reaching the outskirts of the Metropolis, stabled his trusty ass, and took a train to Marylebone. At the station it came as rather shock to him to find that the courteous constable near the entrance knew him, and when he went little further another recognised him.

He stayed at the Carlyle Club. Mr Lumby said that had often pictured in London his imagination, but admitted that the actuality was beyond anything had ever dreamed of. During his week end stay he had opportunities to listen to famous preachers, including the Bishop of London. He brought away with him glowing impressions of the great city and intends to pay another visit, but next time will travel by rail

The House of Commons adjourns for the week-end on Friday evening and it was a disappointment to him that he could not see the mother qt Parliaments in session, but had conversations with Labour M.P.s. and also attended a Labour meeting. One thing that impressed itself upon him, after hearing the condition of things in other parts of the country, was that in Howdenshire the farm workers had comparatively little to grumble about

Giving quaint expression on his impressions of London, he said that  it was not a good place for women  as it was likely to spoil them for home life and turn their minds too much to dress and personal adornment.

Mr Lumby was obviously in some sort of financial embarrassment as  soon afterwards the following report appeared:

Mr Lumby, of Howden has indeed fallen on evil times, and that within a week of the completion of his and Mrs Lumby's famous donkey-cart trip to London and back when they and their pretty little turn out appeared in the local and London daily journals.

The latest development is the temporary loss of his intelligent donkey, and the "business" cart to which it was attached, which were seized as he was passing down the street last week by J Camp, County Court Bailiff, to satisfy an order of the Court. After the animal and cart had been safely lodged on the premises of the Angel Hotel, the next step was the appearance of posters announcing the sale of donkey and cart (without reserve) by Messrs Clegg and Moore at 7 p.m. Tuesday in the Hotel Yard

Long before this time a crowd began to assemble (Mr Lumby being one the first arrivals), and the town was "agog" with excitement. At seven clock the Angel Hotel yard was packed to its utmost capacity. During a conversation with the auctioneer, Mr Lumby stated that the donkey in 14 days travelled 367 miles, and had rested during the three days and his wife were in the city (cheers). Being brought from the stable, the animal at once recognised its old master, who patted its neck while yoking it to the cart. Mr  Camp explained that the donkey, cart, and harness were offered for sale  on behalf of the County Court, who had issued execution to distrain on Mr Lumby.

The lot would sell without reserve, as the Court did not give any credit (laughter). They all knew the pedigree of the donkey, what it could do, and what a good time and Mrs Lumby had had in their drive within 17 miles of London (laughter). The first bid was £1, second 25s, third 30s, fourth 35s, fifth 36s, and last 40s (the amount of execution), at which price it was knocked down to Mr T. Drury, of Hailgate.

Mr Drury (who was offered 10s profit within a minute), it afterwards transpired, had bought the lot on Mr Lumby's behalf. Much fun was caused by Mr Lumby approaching the bailiff and observing, "I never ought to have let a man like you take from me" (loud laughter). Mounting the cart, Mr Drury drove away, midst cheers, through the Market-place, followed by the crowd, and later both donkey and cart found their way to their old home in Northolmby-street, and the last seen of "Neddy" was carrying a happy baby for a  ride in Mr Lumby's yard.

Do we still have such characters in Howden? I have looked for the pictures of him but with no luck so far. So I am including this donkey picture taken at Marsh Farm Howden [ now where the health centre is] and showing I believe children of the Shaw family. I doubt whether this cart would have made it to London! 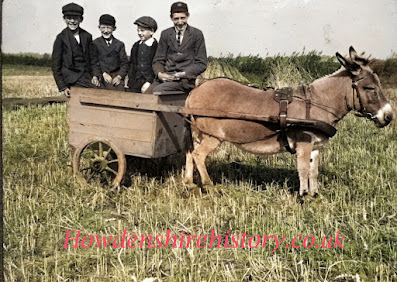 As an aside I have been asked why I write my web address in red on these old photos. It is because I have collected them over many years and sell them as prints or digital images as well as using them in slide shows etc.  I like to share them. Sadly, however, over time I have seen many of my pictures appearing on other websites and facebook pages without credit so I regrettably have to try to prevent this happening by writing on them.

Posted by Susan Butler at Wednesday, January 13, 2021 No comments: