It is now February- but one of the coldest weekends of the winter so far. There is a cold wind and it is raining and dark. We have not seen the sun for some days but I suppose this winter has not seen heavy snow and lingering frosts - so we must be grateful.

Our snowdrops in the garden are putting on a brave show this year. I have tried to identify the variety from pictures on the internet but there are too many to choose from! 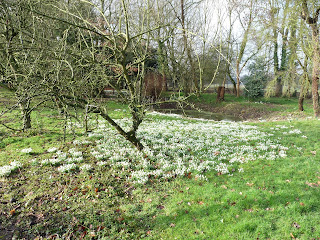 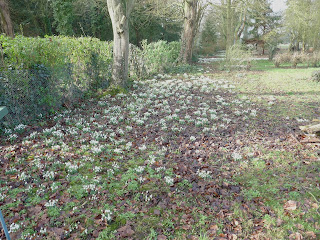 It is definitely a time to keep the Rayburn going and work on local history.  I have been looking at the histories of two houses in Eastrington and Newport.  I think that the Newport house, known today as Newport Grange, was once the home of  James MacTurk  and then his son in law Thomas Moss.

James MacTurk was one of three Scottish brothers who came to Yorkshire to work on digging the Market Weighton canal in the 1770s. Where the canal crossed the Cave Causeway beds of clay were found and this led to the growth of a brick and tile making settlement. James probably built the Turk's Head inn and was certainly the first landlord. His brother moved to South Cave and it was his son who was the doctor who attended Branwell Bronte.

Thomas Moss married James' daughter and they lived at Newport Grange. It is believed - but not proven - that their son, another Thomas was transported to Australia after stealing a sheep from a field near Hull. He and his accomplice hid the sheep's head, which had identifying marks on it, under a heap of coal where it was easily found by  a policeman!

Other projects I am working on are the family background of William Hamond Bartholomew and a Goole lady who owned a stone quarry.

And of course I am preparing for a talk on 28th February on the history of The Ashes Playing Field in Howden. It will be at 7pm in the Manor House and will launch the Ashes Sharing Heritage Project.

I would be pleased to know the names of these gentlemen and also to have any more pictures to use in the talk. If you do have any please contact me through my website  howdenshirehistory.co.uk [ Images sent through Facebook are a bit blurry for projecting at a large size].


howdenshirehistory.co.uk
Posted by Susan Butler at Sunday, February 12, 2017 No comments: