I have been sorting kitchen cupboards and decided I was more interested in sorting old pictures.

So here are some views from 2002 when the PA building in Bridgegate was under construction. Although to me these pictures seem relatively recent I think that a lot of newer Howden residents  might not know what used to be there. I have included an old photo to help 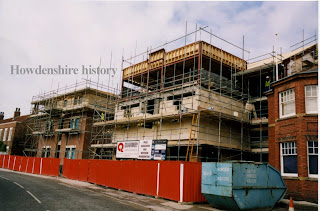 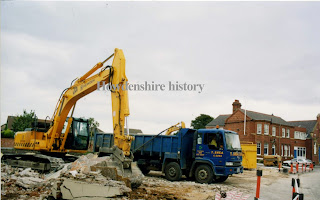 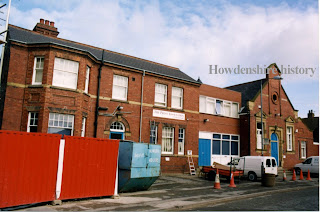 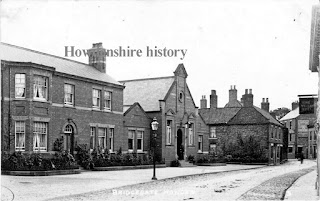 Posted by Susan Butler at Wednesday, October 23, 2019 No comments:

I have just come in from walking Molly and have picked up a few conkers from the road through Saltmarshe Park. I cannot resist them when they are so shiny but after a few days they become dull. There is a saying that spiders don't like conkers and that if you put them under your furniture it will keep them away. I have not noticed that it works - we have plenty of spiders!

It's been a busy few weeks. Both my Goole and Howden local history classes have started and we have been looking at local nonconformists - Puritans, Independents and Quakers. Topics have ranged from Ezekiel Rogers who took his congregation in the 1630s from Rowley near South Cave to America and founded Rowley in Massachusetts to Sebastian Ellithorp of Sandholme who was a Quaker and who died a prisoner in York castle for his faith.

Interesting too has been the story of  Cornelius Empson of Goole, another Quaker, who emigrated and called his house in Delaware 'Goole Grange'.

And not forgetting the minister of the Congregational church in Howden who slept in a different bed for 14 years until his church  and manse were built. This was the chapel which stood in St Helen's Square in Howden.

Also this summer I have been attending the series of free lunchtime concerts in Howden Minster. These were community events,  some sponsored by local businesses. I have been 'on the door' giving out programmes and have been pleasantly surprised as I chatted to people as they came in.

Some were local people who came to enjoy an hour of classical music followed by a cup of tea within walking or easy driving  distance of their homes.

But several had travelled from further afield - from Sheffield, Hornsea, Doncaster and as far as Derby to name but a few. They had made a day of it, exploring Howden and having lunch in the town. Many became regulars and  commented on  the friendliness of the people, the beauty of the church and the high quality of the music. We have heard professional performances on piano, oboe, violin, flute as well as by two singers.

I am  already looking forward to next year's concert series. We are very lucky to live in the Howdenshire area which has such an interesting past but has so much going on today.

Posted by Susan Butler at Wednesday, October 16, 2019 No comments: