Now it is almost Easter but it feels cold and grey. This week I pruned my raspberries and moved a loganberry but  I am a fair weather gardener and am not as enthusiastic when the sun is not shining.

This week the latest issue of the Howdenshire Living magazine appeared. I have contributed an article and some photographs of Wallingfen and Newport which have come out very well. I wrote about the witches of Wallingfen and my own family connection [ maybe!] with Rebecca Nurse who was one of the Salem witches.

But time does not stop and I have just written a piece for the next issue. I have written about Airmyn and the Smithson family. Hugh Smithson was given Airmyn by a relative when in 1740 he and his new bride visited  the elderly owner,  his great uncle who had no heir,  and who decided to leave it to the young couple.

Hugh and his wife Elizabeth soon afterwards became Duke and Duchess of Northumberland. Meanwhile Airmyn developed as a small port where passengers could take a ship to London.

In between I have answered queries about who built the Marshlands Hotel in Old Goole and about the Plough Inn in Ellerker.   Here is a picture of the Plough which is now a private house on the corner of the road to South Cave. 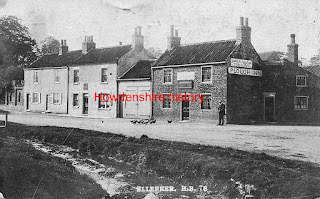 Yet another wet day - I needed my Wellingtons this morning just to let the chickens out and it was raining so heavily that I gave them their pellets inside as I think otherwise they would have turned to mush before they could be eaten. But the chickens are still laying well and enjoying pecking around the garden. Still deciding what to do when we get the vegetables planted - I am considering raised beds which I can net.


On Saturday I had a stall as usual at the hobbies exhibition in Goole. I have been going for several years and always enjoy meeting people who are interested in local history. Queries this year ranged from how to find out a house history, where would an ancestor be buried who had died at Newport and lots of requests for old photos of Goole ships, Howden and Goole streets and various villages. I tried to answer them all.

My WEA local history classes are coming to the end of their terms - our main topics of study have been the Empson family of Yokefleet, Goole and Ousefleet and the Knights Templar at Faxfleet.

Now I am hoping to return to the history of Saltmarshe and gardening.

Posted by Susan Butler at Wednesday, March 09, 2016 No comments: