We are in a run of sunny, frosty weather, perfect for dog walking but not so good for the oil tank which will soon need re-filling. But we are seeing signs of spring. The snowdrops - and we have a lot - are just beginning to show white and the daffodil spikes are getting taller.

I have been busy loading pictures into my new website [ not yet online] and also looking at a family history which has been very interesting as the people all lived locally and it  is easier to envisage their lives when I know the area. There is a lot can be found online about families, particularly on the old newspaper sites but nothing can beat  being familiar with the towns and villages mentioned.

Last week  the small  local history group I attend in Goole met again after the Christmas break. We meet on a Thursday morning in the Oddfellows hall and talk about the history of Goole and the surrounding area. Some of us have been researching for many years and continue to do so, others just come to listen and join in the discussions and we have new members who have not long lived in the area. It is surprising what a wealth of knowledge there is around the table.

This week we were talking about Hook and its chapel[s]. One of our group had noticed this building which we thought was surely a former chapel. It looks like so many local chapels

So we are seeing what we can find out. We have consulted the Hook history book which told us that the 'new' chapel was built in 1874/5.
The Goole and Marshland Weekly Times, Friday, 22nd Jan 1875 reports its opening
OPENING OF THE NEW WESLEYAN CHAPEL AT HOOK
The first Wesleyan chapel built at Hook was erected in 1816, the second in 1836, and now 1875 has seen the opening of a third place of worship, rendered necessary in the first place by the increasing congregation and in the next by the want of suitable accommodation for the Sunday school.
Mr James Armitage offered a piece of land at the corner of the roads which meet nearly in the centre of the village, and funds being forthcoming it was decided to build at once. Mr Bairstow, of Selby, was the architect, Mr Elliott and Mr Appleyard, of Goole, the contractors, while the foundation stone was laid at Whitsuntide by Mr W. Dyson, of York.
I am sure we shall find out more  but would be interested in any further information or pictures. We believe that the old chapel building was used as a Sunday school but for how long? And anyone who wants to join us on Thursday mornings would be most welcome.

As I write this it is frosty outside and the car windscreen is frozen.This is in contrast to the very warm weather we had over Christmas - which made it easy to keep the windows open when visitors came as we are still in the grip of Covid. I am hoping that when I read back over these blog posts in future months we shall remember this time but be socialising normally without taking tests before we go out.

I received some lovely Christmas presents and have plenty to read but the tree is now out and the decorations back in their boxes.

So now it is 2022 and as a family historian I am looking forward to exploring the 1921 census which has been released today on Find my Past. Only problem is that you cannot get a transcript or original image without paying, even  if you have a subscription. But you can search for free and when I searched for my mother, Joan Nurse b 1918 in Eastrington I could see she was there and it told me that also on the page were Robert and Elsie, her parents. It correctly identified the Howden area where she was but said she was in Eastington in Gloucestershire. So a few teething problems!

James Edward Mortimer was an entrepreneur born in Cleckheaton who built The Gables, then bought and moved to Knedlington manor and then finally to Howden hall where he died in 1946.

Hull market .There was a great glut of mushrooms  today  in the Shambles and shops, Mrs Lilley, of Eastrington, bringing in 1,000 lbs, which sold from 6d to ls per lb.

HOWDEN. OBITUARY.—The remains of the late Arthur Britton, who for the past seven years had been proprietor of the Bowman's Hotel, were interred in the churchyard Saturday afternoon, the Rev A. Waring officiating. The chief mourners were:—Mrs Britton (widow), Mrs Angus, Mrs Oakes, Miss Gladys Britton, and Miss Kathleen Britton (daughters), Mr and Mrs Hargreaves (uncle and aunt), Mrs Wraight, Mr W. Ayland, Major, Mrs Cockroft and Mrs H. Cockroft. Floral tributes were sent by the widow and family, and Mrs Hargreaves, Mrs Wraight, and Mrs G. Moore, Mr and Mrs Blakey, Miss A. Newman, Miss N. Dealtry, Mr and Mrs J. Good, and Mrs B. Shaw, and the Howden Licensed Victuallers'Assoc. The deceased gentleman's dog followed the coffin to the Parish Church, and remained in tho building during the service, afterwards accompanying the funeral party  to the graveside, where it stood and gazed down at the coffin. 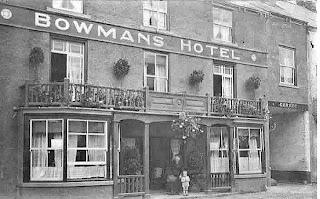 HOWDEN. OCTOGENARIAN'S DEATH:- The death of Mrs Jane Laughton has removed one of Howden's oldest residents. Deceased, who was the widow of the late Mr George Laughton, blacksmith, was 80 years of age, and was born in the same house in Flatgate in which she died. The funeral, which took place on Monday afternoon, was conducted by.the Rev Kellett (curate)

A remarkable story of life-saving by telephone. While travelling from Selby to Howden on the L. and N.W. express on Saturday, two business men, Messrs Croft and Usher, looking out ot the window near Wressle, saw field alongside the line a bull, apparently its knees, attacking with its horns a young hoy, who was lying on the ground. I did not know whether to pull the communication cord or not," said Usher to a newspaper representative afterwards, but both Mr Croft and he instantly got out notebooks and scribbled notes follows "Bull killing boy in behind Wressle Station.' and threw these notes out as we passed level crossings. Arriving at Howden, Croft raced to the signal-box. The signalman quickly notified Wressle Station by 'phone, and the staff raced to the rescue. The child's life was saved, though he was badly mauled  by the bull. He is the nine-year-old son of a  farmer named Wood.

Posted by Susan Butler at Thursday, January 06, 2022 No comments: