The chicken and the egg

November has in many ways lived unto its reputation as a gloomy month. It has rained; the dykes are full and we have had frosts and fog. But last week we fetched some new chickens from a local farm where 12, 000 birds were offered for re-homing at £1 each.

They are settling in nicely although as yet they have not learned to perch and are a few feathers short. And they are laying well - so much so that I have been able to resume putting surplus eggs out for sale in the front porch.

Below are two pictures I have taken this morning


I have now finished my WEA local history classes for this year and we all went for a very pleasant meal after the last one. We may be tutor and students but we are also all good friends.

Now we are looking forward to Christmas events. The first is a concert in Saltmarshe Hall on 9th December. The hall, built in 1825, must have seen many a Christmas concert and party in its time. The hall has been decorated in a traditional style and guests will be able to relax with mulled wine and mince pies while listening to seasonal music. 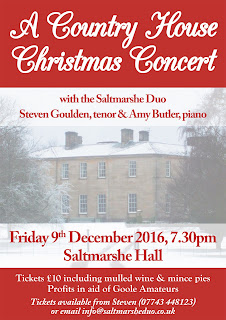 I was recently contacted by an Australian descendant of Simon Hamer who lived in Goole in the early days of the town. She knew something of her ancestor but was interested in knowing more about his Yorkshire roots. So I  thought I would put together what I  already knew with what more I could find and have been surprised at what I have been able to discover.

Simon  Hamer, who died aged 69 in 1844 in Goole was one of the men who shaped the town as we now know it. I am not certain of his origins but he had a brother Thomas. Thomas Hamer appears on the 1851 census at Great Grimsby and is described as the uncle of Ann Maria, Simon's daughter.   Thomas [born in 1773]  says in 1851 he was born at Harfit  in Yorkshire. I cannot find such a place but there is a record of a baptism in 1773 at Harthill near the Chesterfield Canal of a Thomas Amour whose father was called Simon.

I am beginning to think that Thomas and Simon’s father was also called Simon.  There is a record of  a Simon Hamer [quite an unusual name] working on the Cotswold canal  in 1784 There is a lock on the canal called the Griffin Mill Lock which has a wharf above it to unload coal for the mill.   It  was being worked on in 1784 and it is recorded in the records that labourer Simon Hamer received £39 17s 7 ½ d for ‘day work and walling at Mr Griffin’.    I have also found a tantalising reference in an academic paper to a  ‘Simon Hamer, who absconded from the Leeds & Liverpool Canal owing money but  returned to work on other canals ...’ but as yet have not been able to follow this up.

The Leeds Liverpool canal was built in the late 18th and early 19th centuries.   However by 1800 both Thomas and Simon were in Yorkshire. Thomas married Elizabeth Wilkinson of Barmston in 1800. Simon married Dinah Robinson in 1802 at Hutton Buscel near Scarborough. There had been a lot of drainage work taking place on Barmston Drain and Thomas continued his career in this area in the Holderness and Driffield areas connected with the River Hull.   Simon meanwhile may have been working on the Derwent improvements near Scarborough.

Then in 1810 Dinah Hamer aged 27 of Seamer died and was buried at Hutton Buscel  on  June 28th.   Simon remarried, to Margaret Metcalf, early in 1811. Their son,  Metcalf Hamer was baptised at Seamer on the same day as four year old Simon.   Simon and Margaret had a further 10 children although not all survived. Their eldest children were baptised at Seamer - John was the last to be baptised there in 1820.  On the baptism records Simon is shown as a labourer, sometimes at Ayton Forge.

Both Simon and his brother Thomas appear to have been involved not only with drainage and canal projects but also with brickmaking.   In 1819  Thomas Hamer, brick maker of Brompton,  late of Driffield was in a debtor’s prison in  far away Essex while Baines’ trade directory of 1822  shows Simon Hamer  as a brick tile and pot maker in Brompton.  Brompton is near Scarborough.

In 1821 the contracts were signed for the construction of a new canal from Knottingley to Goole for the Aire and Calder Navigation Company. The main contractor was Mark Faviell who had already built several bridges in North Yorkshire. His associates were Abraham Pratt who would do the masonry work and Simon Hamer who would be responsible for the earthworks.   Simon and his family moved to the Goole area.

In 1823 Simon appears in the land tax records for Cowick, occupying a property owned by Widow Fletcher.  He was probably living there as his son Francis who was born - and died - in 1823  was baptised at  nearby Snaith. He is last listed there in 1827 when he presumably moved to the new town of Goole.   In 1826 Whites directory [directories are normally a year behind events] entry for Snaith lists Simon Hamer as contractor and brickmaker.

The new canal was opened in July 1826 and by then 30 houses were built in the new town and 70 were under construction.   Simon was an entrepreneur. In 1827 there is an advertisement for a stagecoach route running from Leeds to Hull. He was one of the proprietors.

Simon was probably a Methodist.  His younger children were baptised in chapel rather than church. He was the first subscriber to Goole's Methodist chapel built in 1829 on North Street, the site of the present chapel. He subscribed the magnificent sum of £50 and also built the chapel.

In 1829 Pigot’s trade directory shows him living in  Adam Street next to the Lowther Hotel [then the Banks Arms].

Also in 1829  we find that he was the owner  of a schooner which he named Hamer. The Goole shipping register lists it as being built in Goole in 1826 by George Thwaites who was also the master.

There is evidence that Simon Hamer continued to work with Abraham Pratt.  In 1830 they were joint  contractors for the erection of a bridge over the Trent at Dunham. Tbe bridge was to be of four iron arches, with the abutments.

Then they won a major contract for 18 miles of the Leeds Selby railway which was opened 1834.  Railways were then very new and this was probably their first venture into railway contracting. The contract was worth £83,000.

Next in 1834  they won a contract to build part of The Whitby and Pickering line. The  newspaper report  refers to ‘Hamer and Pratt’, who had just finished work on the Leeds and Selby railway’.

I think Simon then spent more time in Goole. There is a suggestion that he built George and Ouse Streets and the Sydney Hotel in the late 1830s and early 1840s. He and his family were living in George Street in 1841.

Simon died in 1844 and was buried at Hook on 22nd March aged 69.  His business was wound up by his wife and daughter.

Few people in Goole today have heard of Simon Hamer. But I hope to spread the word that he was a man who seems to have risen from quite lowly beginnings to become a pioneer canal and rail contractor who also contributed a lot to the early town of Goole.