I am sitting at the computer looking at the garden trees swaying gently in the wind. I think that Storm Eunice concentrated her fury in the south and let us off lightly. Although sometimes I wonder whether it is best not to follow these dramatic warnings and just wait for the weather to do its thing - as our forefathers did.

Our snowdrops have put on an excellent show this year and have spread even further than last year.  The hellebores are not quite in flower and neither are the daffodils. But I have been buying seeds and am looking forward to getting some tomatoes started on the windowsill. 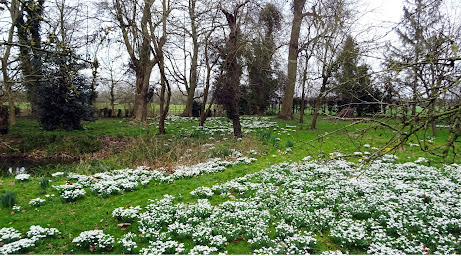 It has been busy too on the history front. I have been looking at a family who emigrated from East Yorkshire to South Africa in the latter half of the nineteenth century. The branch I have been looking at were a couple who married in 1890 in Howden church. William Buttle Turner who was from Allerthorpe and Caroline 'Carrie' Hart went to live in an area near Camperdown where extended family already lived.
Caroline was the daughter of Anelay Hart who was the farm bailiff and later a tenant of  the home farm at Sandhall near Howden. The Scholfield family who owned the Sandhall estate  were prominent in the life of Howdenshire and were great benefactors to the area.  For example the aptly named Scholfield memorial hall in Skelton was built for the community as a school and church combined.
Two of the magnificent Capronnier windows in the west front of Howden Minster are dedicated to members of the family. The central window is  dedicated to William and Ann Scholfield
To the glory of God this window is dedicated. It also bears witness to the love and gratitude of the eight surviving children of William and Ann Scholfield of Sandhall whose married life lasted more than fifty seven years. William Scholfield born February 28 1774. Died August 8 1854 and his wife born June 27 1773. Died August 18 1856. They are buried in the Chapter House of this church.
The right hand window is dedicated to their son Robert.  Underneath the script reads
To the glory of God and in affectionate remembrance of Robert Scholfield esq of Sandhall in this parish. This window is erected by his sorrowing friends and neighbours. He died January 11th 1868 aged 64 years

There is also another magnificent window in Doncaster Minster dedicated to Robert's brother Dr Edward Scholfield.
In complete contrast to this the history group I attend in Goole has been looking at the development of Hook Road in the town, most of which was built in the late nineteenth century and occupied by seafarers and their families and the professional classes. It is our eventual intention to write the material up  and make it  freely available. We are particularly interested in trying to find out where some of the house names originated. 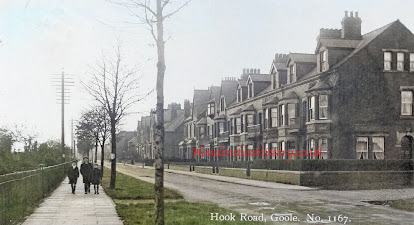