It is the strange limbo period between Christmas and New Year when no one quite knows what to do. Of course we are quite near York where there have been awful floods and so are very grateful that the Ouse is behaving by the time it reaches us. We have taken Molly along the river walk just to check.

The chickens are still laying well - around 6 eggs a day which I think is very good for this time of year although now we are past the solstice every day is getting ' a cockstride lighter' and of course it is still unseasonably mild.

Today we had a look at the bees to see if they needed feeding any fondant. Normally they would be almost asleep at this time of year but as it is so mild they are flying a little and using up their stored supplies. They are alright at the moment but need watching.

On the history front I was recently asked if I knew anything about a Goole architect called Mark Faviell who, according to Wikipedia, designed Amcotts Church in the 1850s

I had never heard of him so did a little research.

Mark Faviell lived at Amcotts Lodge and in October 1850 the newspapers reported  how he and his family were involved in building the new church.  The foundation stone was laid by  his son Jeremiah. Below is an edited extract of the newspaper report.

'NEW CHURCH AT AMCOTTS, IN THE PARISH OF ALTHORP, LINCOLNSHIRE. On Tuesday last, the interesting ceremony of laying the foundation stone for a new church took place at the pleasant village of Amcotts, the parish of Althorp, on the banks of the Trent, in the county of Lincoln. The weather, which on the previous day had been extremely showery and boisterous, was remarkably fine and propitious, and there was consequently numerous attendance of the gentry, clergy, and other inhabitants of the neighbourhood.

The church is to be built in the Early Gothic style architecture, with lancet windows. It will be erected on the site of the ancient chapel-of-ease to the parish church of Althorp,  which fell down about the Midsummer of 1849. But, as will be seen below, the new edifice will,  on the petition of Mark Faviell, Esq., of Amcotts Lodge, be constituted a district church, and will be separated for ever from the mother church of the parish.

The cost of the erection is estimated at from £1200 to £1500, exclusive of the parsonage house. Towards this sum of one hundred guineas has been contributed by Sir William Amcotts Ingilby, Bart., the lord of the manor: Mark Faviell, Esq., of Amcotts Lodge, has contributed £100; Mrs. Faviell, of Stockeld Park, £100; Miss Isabel Amelia Faviell, £100; other members of Mr. Faviell's family, £100; Mark Faviell, Jun., Esq., £50; Archdeacon Stonehouse, £20; and Joseph Thornton, Esq., of Kettlethorp Hall, £20. About £400 has been raised in the parish, and there is an augmentation of £110 from Queen Anne's bounty fund.

About noon, the principal personages who intended to take part in the proceedings assembled at the schoolroom of the parish, (recently erected by J. Faviell. Esq., at his sole cost,) whence they walked (the clergy wearing their silk gowns) to the site of the new church, neaded by the Venerable the Archdeacon Stonehouse.

When the company had arrived on the ground, the ceremonial was commenced by the Venerable Archdeacon Stonehouse calling upon the assemblage to join in singing the 132nd Psalm. After the singing, the Archdeacon offered up a prayer for the whole state of Christ's Church militant here on earth.

An excavation had been prepared in the foundation-stone for the reception of two hermetically-sealed glass tubes, the one containing a list of the donors, subscribers to the re erection fund, and the other a number of coins of the reign of Queen Victoria, with a sheet copper bearing the following inscription:

"The First Stone of this Church was laid by Jeremiah Bourn Faviell, Esq., of Stockeld Park, near Wetherby, Yorkshire, on the 22nd day of October, 1850.—by order  in Council, this Chapelry was separated from the Mother Church of Althorp, on the Petition of Mark Faviell, of Amcotts Lodge. With the aid of the good Lord Bishop of Lincoln, and the Venerable Archdeacon Stonehouse, the Lands at Amcotts, in Lieu of Tithe, were set apart for the maintenance of a Vicar for ever."

The ceremonial having been concluded, the principal portion of the company returned to the school-room, where a cold collation had been set out in a very liberal style.'

It will be seen from this that the Faviell family were instrumental in the building of and paying for the church but there is no mention of Mark Faviell being the architect.

In fact it seems unlikely as Mark Faviell was a contractor on the Knottingley to Goole canal, working with Abraham Pratt and Simon Hamer. He was living at Amcotts by 1822. He and his wife had eleven children, three of whom became prominent railway contractors. Mark snr lived at Amcotts and described himself thereafter as a farmer although he underwrote his sons' contracts, some of which were in India and Australia. He died in 1861.

After publishing this post I was sent by my friend Pauline Stainton an image from The Lincolnshire Chronicle of 29th July 1853 which gives details of the builders of Amcotts church but nothing of who designed it. 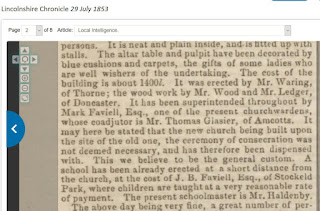 Posted by Susan Butler at Wednesday, December 30, 2015 No comments:

This is the time of year when everyone is preparing for Christmas and there never seems to be enough time to do everything.

Last night I went to see Father Christmas at Laxton Victory Hall and sing some carols. We enjoyed mulled wine, sang with hilarity about the 12 days of Christmas [we kept forgetting which gift was given on which day despite helpful mimes from the stage] and watched the small children receive gifts from the red-suited man himself.

It was very much a village event organised by the hall committee with The Saltmarshe Duo [Amy Butler and Steven Goulden]  performing for their own community. Tonight is a similar event as it is the Boothferry History Group Christmas party in Goole.  This is a lovely group with wonderful speakers every fortnight in The Courtyard and a very keen membership who will, tonight be enjoying a buffet, games and probably 12 more days of Christmas!!

I know many readers of my blog enjoy hearing about our chickens. We still have 12 happy hens laying well although one has decided to walk alone - round to our neighbours where she has found an easily accessible supply of cat biscuits.

On the history front our friend John Leake is pleased with the response to his book about Foggathorpe which is selling well and I am keeping up with orders for my own books about Goole, Eastrington and Howden which make good Christmas presents.
Posted by Susan Butler at Monday, December 14, 2015 No comments:

I am delighted that our friend John Leake, who has been working for a long time on his book about the village of Foggathorpe near Howden and Bubwith, has at last seen it appear in print.

We have been very involved with its editing and production and so it was lovely to see it for the first time when John came to the history group lunch in Goole on Thursday. It is a hardback book with dust jacket and is a fascinating read. It would make a good Christmas present for anyone interested in local history. You can buy it at Chappelows' newsagents in Howden [priced at £15.95] or direct from John at

In other news I have learned another new beekeeping word. Our hive is now going to have an eke added to it. This is like a mini super and is used as a spacer in winter when the bees need feeding. It was hammered together yesterday on the kitchen table! I sometimes wonder what the medieval monks who kept bees not only for honey but for the wax for candles would have made of quilts and ekes.

The chickens are flourishing - the 7 eggs they have laid today have been converted already into Christmas  and Yorkshire puddings.

Posted by Susan Butler at Sunday, December 06, 2015 No comments: