Today has been Eastrington show - and apart from one light shower it did not rain.  The show has had several bad weather years and for a small village show this is disastrous. The crowds don't come, the gate money is down but still the tents etc need to be paid for.

I hope that financially today was a success. Events were perhaps on a smaller scale than some years - in my childhood I remember all the big name show jumpers - Andrew Fielder, Malcolm Pyrah- used to come for what was a qualifier for the bigger show in London.

But the handicraft classes were well supported with eggs, jam, flower arrangements and children's writing all looking good. There were rows of cakes, bread loaves, bownies and buns and, after the judges had done their work, the prize cards were closely scrutinised. And I have to confess that, as ever, there were a few moans from those who thought the judges had not go it quite right.

Elsewhere on the field a man made owls with his chain saw, dogs wagged tails and looked shiny and the fair was there for the children.  Quite a lot of beer was drunk and the Trinity Steel Band, made up of young people from Hull played an excellent selection throughout the day.


I had a display of old Eastrington pictures and objects in the craft tent and thoroughly enjoyed meeting old friends and new visitors. There is nothing like old school photos in particular to revive memories.

I also had, as well as my Eastrington history book, some mounted prints of the village streets for sale.  I was surprised by the number of people who did not quite recognise where they were as I had not thought the village had changed very much - but looking at these old views with new eyes I realise it has.

Here is a picture from my collection of old photos - they are all available to buy as prints. It is a small version of a picture which dates I think from Edwardian times. I have added a bit of colour to it by the wonder of Photoshop and I think it evokes well  the centre of the village in the days before motor cars. Click on the picture to see it bigger - and then you can see how the road then had even more potholes than our roads today! 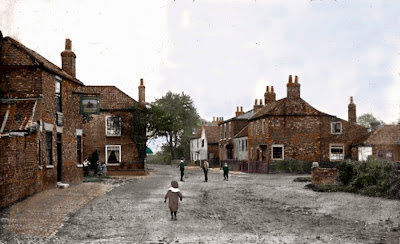 At last it is warm and sunny and the garden is growing. Today we ate our first few strawberries from the greenhouse and this week we have several times heard a cuckoo.

On Thursday we met a lovely couple from USA who were following in the footsteps of their seventeenth century Quaker ancestors. I have written before about them -  William Goforth from Knedlington who emigrated with his wife Anne Skipwith  from Hull in 1677.

We were able to show our American visitors Skipwith church and the moated site opposite which was where the Skipwith ancestral home once stood, Quaker farm at Sandholme where local meetings took place and of course Knedlington where the Goforths lived.

Although it is not possible to say exactly where they lived I was able to point out the field which was the Knedlington  Quaker burial ground although it is now cultivated.

We then toured Howden and visited the church. I think those of us who live locally sometimes take the church for granted. Our visitors were surprised at the size and splendour of this magnificent building in such a comparatively small market town.

It is always enjoyable meeting in real life those  people that previously I have only met through the medium of the internet.