Barnhill near Howden - and mud

Today is the second day of December and it is fine and frosty. Molly and I have just been for a walk and at last the standing water is retreating and the ground is less soggy.  Road edges have suffered in this weather.
There has been work going on at Skelton to  improve the clough entry into the  River Ouse but this has meant that with the road intermittently closed more traffic has been using the narrow track known as the Hazel croft or more usually Asselcroft or Aizle croft.   I don't normally meet any other traffic on this single track road but passing is difficult and as the road sides have become incredibly muddy I am avoiding it.

Historically I am turning my attention away from chapels and looking at the interesting history of Barnhill near Howden. By coincidence I have been asked twice recently about it and so have looked
out my notes and done a bit more research. Here is a summary.

A brief history of Barnhill

In a charter of 959 AD it was mentioned as ‘Beornhyll’. There have always been stories about the 'hill' visible south west of Barnhill hall.  Was it a burial place? Who was‘Beorn’  - the word could could mean warrior or could be  simply a personal name.

In the Domesday Book of 1086 ‘Bernehelt’ was listed as a bailiwick of the manor of Howden and was approx one carucate - the area which could be ploughed by one plough team in a year and could be anywhere  between 60 and 100acres.

There was a house and moat and a family called Barnhill or Bernhill lived there. The moat has been much altered but was on the  edge  of Howden Park.

There are mentions of a Richard de Bernhill  in 1334 and a Nicholas de Bernhill in 1398 and 1415. The Bernhill family seem to have been connected by marriage to the Saltmarshe family.

In 1481 Edward Saltmarshe wrote in his will that William Bernyll should inherit the 'capital messuage' of Bernyll and all the lands... according to the entail created by the ancestors of the said William.
However the will also said that if William or  his heirs wanted to sell Barnhill then the Saltmarshe family should have first refusal.
Possibly William's mother was a Saltmarshe as the will also said that William  should pay 3s 4d annually to his father Thomas's widow.

The will also stipulated that the present tenant of Barnhill should stay on for at least 12 years, implying that William himself lived elsewhere.

The Metham family at Barnhill

In 1495  William and wife Emma sold Barnhill to Sir Thomas Metham and  his wife Isabel.  Sir Thomas lived at Metham near Laxton. Isabel was his second wife and they had a son William. Sir Thomas gave Barnhill to William.

There was an interesting court case in the early 1530s  describing how Sir Robert Constable of Flamborough sent a gang of thirty men to 'Barnhill Grange' who forcibly broke in and took several animals. Sir Robert  said he believed that Barnhill was part of manor of Howden and took 8 small oxen,  6 draught oxen, 4 milk cows,  2 mares with foals and 8 young colts  in lieu of his steward’s fees for the manor.

There were accusations that there was a fight, servants were hurt, oats were destroyed and other animals driven away.

This Metham family were still there in 1590  when Howden registers show the baptism of Isabel, daughter of Thomas Metham of 'Barnell'. The Metham name disappears from the registers soon afterwards but there was obviously a small community there as there are several incidences of 'Barnell' in the Howden registers throughout the seventeenth century.

From the 1720s  descendants of Thomas Eland lived at Barnhill. In the parish records Barnhill is written variously as Barnal House, Barnellhall etc.

There is a stone stone outside Howden church to George Eland late of Barnhill Hall who died in 1795 aged 50.

By 1834 Thomas Waterhouse was renting the farm at Barnhill Hall and living there with six children and two servants.

In 1861 Robert Askham and his family were living at Barnhill Hall which was a farm of 138 acres.
But in Feb 1870 there was an auction at Barnhill Hall, the premises then of Mrs Askham.

John and Alice Kershaw were farming there in  1871 but Alice died in 1873 and John in 1880. There is a stone to their memory in the churchyard.

In 1878  there was another sale at Barnhill when all the  farm stock of a Mr Ibbetson was auctioned.
By 1881 John and Anne Everatt and one year old Richard and 2 farm servants were at the farm. The couple went on to have seven children.

After the Everatts Barnhill had other occupiers until the Lapish family moved in. The last members of the family to live there were, I believe Don Lapish, his wife Rene and their son Richard.


Rene came to Howden as a land girl and lived in the Thorpe Road hostel. Below are some pictures of her as a land girl. She married in 1956.

After writing the piece above I was asked if I knew anything about Woodcock hall which was a little way behind Barnhill.

It was on the lane which runs from  Barnhill and towards Howden station.  The map here shows where it was in 1854 but by 1881 the house was uninhabited. 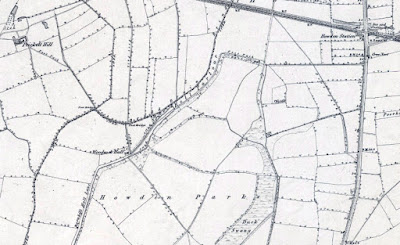 I found that a Jane Watson, wife of Carrick Watson had died there in 1863 although they could not have been there long as in 1861 they were living in the Manor house in Howden and Carrick was a cordwainer [ worker with leather.]

Does anyone know any more?