My Goole students have recently been studying the shipbuilders of the town. We started by looking at the early builders such as John Gutteridge, George Outwin, James Wake and John and Thomas Day who had small yards, mostly on Canal side.

Then we have looked at the bigger yard on Vermuyden Terrace, on the bank of the Dutch River founded by John Pilkington and run successfully until his death in 1886 by Thomas Scott.

Eventually this yard went into receivership and was rescued by the Craggs family. This began a long association between the family and the town of Goole. Even I, who knew then little about shipbuilding, was very grateful to receive a Craggs memorial grant when I left GGS - although I do not think that I knew then what the connection was between the name and Goole.

We have been looking at some amazing pictures of ships being launched from between a row of houses and learning of Goole ships coming to grief in various parts of the world. It is a fascinating part of Goole's history.

On the domestic front I have had some winter flu bug and Molly does not understand why her long walks have not been happening. Roll on spring. At least the snowdrops have appeared and are carpeting the garden.
Posted by Susan Butler at Thursday, January 26, 2012 1 comment:

I have been looking this week at various aspects of the history of Howden church and in particular some of the interesting people associated with it.

I was researching the history of the organ and found that in the 1890s the organist, choirmaster and master of the Howden Grammar school was Charles Sanderson Fosbery [1865-1958].

I knew little of him but I found that after leaving Howden he eventually moved in 1900 to Montreal in Canada. There, in 1909, he founded the Lower Canada College which, on his retirement in 1935, he gifted to the Old Boys of the school. It still flourishes as a private independent school. He returned to England, married a former matron of the school and lived in Bournemouth.

I wonder if he ever returned to visit Howden.
Posted by Susan Butler at Wednesday, January 18, 2012 No comments:

We are in the news at the moment with features on BBC Countryfile and the opening of David Hockney's new exhibition at the Royal Academy based on the East Yorkshire landscape.

East Yorkshire is described as an undiscovered but beautiful area - those of us who live here already knew that. Much of the coverage too is of the Yorkshire Wolds and not of our flatter and more arable landscape.

Where we live we are dominated by watercourses, much like some areas of Holland. There is the fast-flowing Ouse, the Derwent, the Aire and the Don (although the Don is the Dutch River as it flows through Goole). Also vital is the smaller River Foulness, known locally as the 'Foonah', as well as countless large drains, with their massive clough doors which stop the water running back in at high tide.

The land is rich and fertile and there are some lovely local walks. I walk Molly every morning not far from home. This morning it was both sunny and frosty and a pleasure to watch a big hare running across the frosty field.

The following pictures were taken two days ago and this morning. 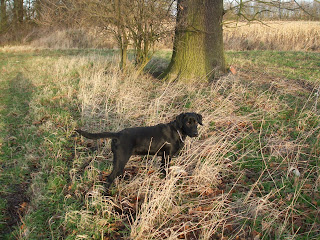 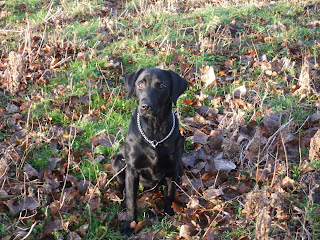 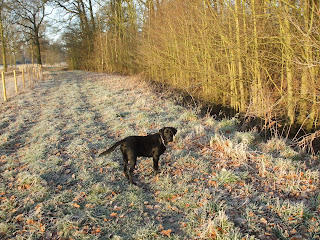 Posted by Susan Butler at Saturday, January 14, 2012 No comments:

Amongst my collection of old photos are several which were taken from around 1900 - 1903 by members of the Wadsworth family.

These small snapshots show the visits of Barnum and Bailey's and Sangers' circuses to Goole as well as processions to celebrate Mafeking Day and some of the Snaith Commando.

I am making digital copies of them and repairing some of the scratches and creases. But they are lovely pictures as they show the people of Goole in an informal way.

Here is a picture of Boothferry Road on Whit Monday 1901. I wonder what happened to these two little boys. 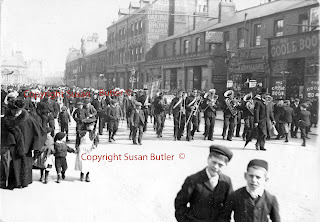 Posted by Susan Butler at Wednesday, January 11, 2012 No comments: 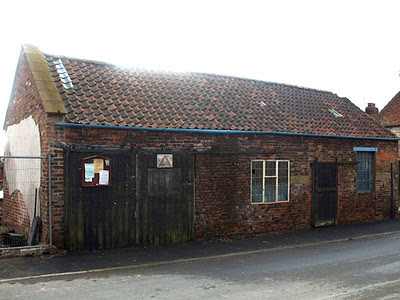 I have been looking through my Howden notes and thought the following information may be of interest to researchers.

Goole Library has some Howden parish records which deal with the period 1828 to 1843. They refer to several matters but particularly to the poor.

For example, at a meeting in July 1828 it was reported that Thomas Nutbrown applied for clothes and it was agreed that he was to have a second hand coat.

In August the case of Milson Clark was discussed. He had previously been given notice to leave the workhouse and had appeared again to 'beg for something to set himself up as a quack doctor'. His request was refused on the grounds of his bad conduct.

A Mary Walsh appeared with a request for shoes. She was told to have the old ones repaired.

Also in these records are bastardy payments made by men to maintain their illegitimate children as well as some ale house licences, jury lists and notes on drains etc.

The records cover quite a short period but are very useful for anyone with ancestors in Howden.
Posted by Susan Butler at Wednesday, January 04, 2012 No comments: