I have recently upgraded my computer and have been playing with an application which allows me to create and save slideshows.

Here is my first attempt using some old pictures of Bridgegate in Howden. Try opening it in full screen view.

Happy New Year to everyone.

Christmas Day has been and gone and today the turkey was made into a pie. It has been snowing in the south of the country but here we have nothing but a bit of frost.

In this slightly quieter time between Christmas and New Year I have been looking at  some of my own family history. I found an interesting reference to my Nurse ancestors in a golden wedding report from 1906. Such reports are always fascinating as they allow one a glimpse of ordinary lives of local people. This one tells of a couple from Balkhome who celebrated their golden wedding in 1906 but who could remember events from the 1830s.

On Thursday of last week Mr and Mrs William Gibson, Balkholme, near Eastrington, celebrated their golden wedding, and were the recipients of hearty congratulations and good wishes from a large number of residents throughout the Eastrington and Howden district, where both resided the whole of their lives.

Mr Gibson, who is in his 76th year, was born at Balkholme on the 10th of March 1831, and is the eldest son of the late Samuel Gibson, and one of a family of 12 children. He has not been a great traveller, and excepting odd day's outing, has spent the whole of his life at, or within a mile two of, the hamlet of Balkholme. He only attended school  for a few days sometimes," and had to commence work at a very early age to help maintain the family, he and his mother working day in and day out in all weathers for 1s a day—the mother 8d, and the boy 4d a day; whilst his father's wages as labourer, qualified do any kind of farm work, were but 10s a week. At the age of 13 he was hired at Saltmarshe Grange, under Mr Dunnell, where he rose to be foreman.

After twelve years' service, at the of 25, he wooed and wed Miss Maria Johnson, eldest daughter of a family ten of the late Mr W. Johnson, of Goole, two years his junior, Miss Johnson having been born at Goole, on April 28th, 1835. The wedding took place St. Peter's Church, Howden, on the 29th March, 1856: and during their long and happy married life they have occupied a small holding at Balkholme, under T. Martin, of 'Yorkfleet', where they are able to keep a cow  or two, and are spending their declining years in comparatively comfortable circumstances.

He and Mrs Gibson have had only a small family  of three sons, all of whom are still living, married, and doing well —George, aged 48, living at Barmston; Henry (46), living at Mews; and Jack (40), residing in Hull. Their grandchildren number 11. Mr and Mrs Gibson, despite their advanced age, enjoy wonderful health, and have had little expense with doctoring. The former has scarcely ever had had a day's illness in his life, and thinks nothing now of an eight or nine miles walk. In his own words, he has been used "to roughing it," and is a true type of the robust Yorkshireman of the olden days.

When interviewed by our representative, he related several interesting incidents of 60 years ago. He recollects the old coach running between Selby and Hull, and the opening the Hull and Selby Railway; the days when the threshing was done by the flail and horse machine; the introduction of the steam threshing machine, the first coming into Balkholme belonging to Messrs Thompson and Nurse. Wheat was over £4 a quarter, and flour 4s stone. He has mown as much as 18 acres of wheat, and with the help of his wife, tied up, stooked and raked the same ready for leading in 7 or 8 days, at from 7s to an acre.

Balkholme is not exactly a large place but Mr Gibson seems to have been happy there not travelling far for the whole of his life.

The article  was illustrated but few photographs were published then in newspapers so this is what the reader of the Hull Mail saw.

And I learned that my ancestor, probably Isaac Nurse and his brother in law Stephen Thompson who was a machine maker, had a very early steam threshing machine.

Posted by Susan Butler at Wednesday, December 27, 2017 No comments:

It is Christmas Eve and I have just tidied up the kitchen, fed the chickens with some old crusts and am looking forward to a busy day of cooking and wrapping. But I thought I would just complete this blog post which I began a few days ago.

I was recently asked about the history of the brickworks at Sandholme. It is now  a landfill site at the side of the M62 motorway..

I thought I knew all about it as a friend's grandfather was the manager there but when I came to do a bit of research I ran into trouble. My information was that it opened around 1855 and stood on land allotted to the Saltmarshe family in the late 18th century when Bishopsoil Common was enclosed.

I have looked on old maps but cannot find anything until the 1890s and I also noticed that the land where it stood was allotted to Cotness. It seems that Philip Saltmarshe of Saltmarshe and Rev Philip Simpson of Metham, who owned Cotness, swapped some land in the 1860s.

Philip Saltmarshe, at some point, then decided that it would be useful and perhaps profitable to have his own brickworks to provide bricks  for the farms and houses on his estate at Saltmarshe, Laxton and Balkholme. There were already long established brickworks at nearby Newport and there was obviously suitable clay. However the site was a good distance from the Market Weighton canal which offered convenient water transport for heavy bricks and tiles for commercial sales.

But then the Hull and Barnsley railway line was built in the 1880s and conveniently passed adjacent to the site. Transport problems were solved at a stroke and sidings ran from Sandholme station into the brickworks. I wonder in fact whether there was a brickworks before the railway - further research needed.

In 1901 the brickyard foreman was Jarvis Slater, originally from Eastrington and there were three other houses for workers on the site. In all there were five more brickyard labourers and one man who was the stationary engine driver living at the brickworks.

Meanwhile at Saltmarshe in the mid 1880s a new estate manager, John Biggs had been appointed.  He lived at Laxton and was responsible for the operation of the brickyard, in later years arriving there to pay the wages in a large car, an unusual sight at that time.

He employed a new brickyard foreman from Yaddlethorpe brickworks,  John William Clark.  John and his wife Ada and family lived on site but before the First World War  he moved to the brickworks at Crowle. However his cousin, Luther Clark, remained at the Sandholme brickworks.

He had married local girl Bertha Turner and they had two daughters, Bertha and Eva. He became the brickyard manager and remained part of Newport life for many years, being a stalwart of the chapel.

While researching the brickyard I was surprised to find that during the First World war there was an official work camp there for conscientious objectors. There was a barracks which was later converted into a house. As yet I know nothing further about it but more records are coming online all the time.

The brickworks was sold by the Saltmarshe estate and for a time was run by the White family from Eastrington. It finally closed, I think, in 1969.

And now it's time to leave local history and celebrate Christmas. Merry Christmas to all who read my blog. 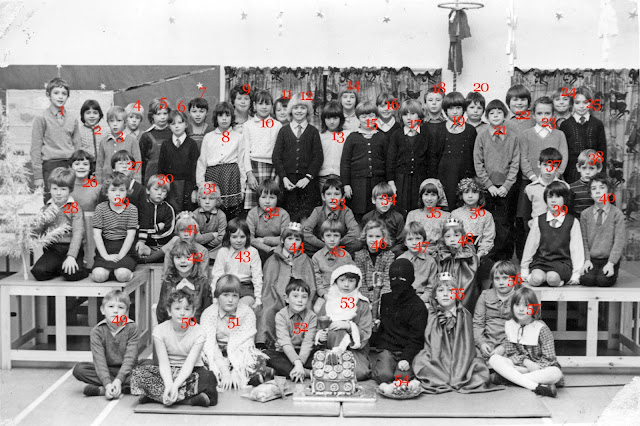 Posted by Susan Butler at Saturday, December 02, 2017 No comments: