To my surprise it is well over a month since I last wrote anything so a catch up is overdue. It has not been a great harvest of fruit this year due I think to the strange weather we had in spring. Brambles came and went very quickly and although we have some apples there are not many. The same is true of the damsons - the only one enjoying the few fallen ones is Molly the dog.
I have given two local history talks recently - one in Howden and one in Goole. Although Covid is still with us I think that as long as we are careful it is good to begin to have some social meetings. The first talk was for the Howden Civic Society and I showed pictures of the changing face of Howden. Some of those present were new to the town and I hope enjoyed seeing how much has changed well within living memory.
Here is one picture I showed which is of South Howden station in the 1950s. The track bed is now more or less the route of Shelford Avenue, named for William Shelford,  the Hull and Barnsley railway engineer 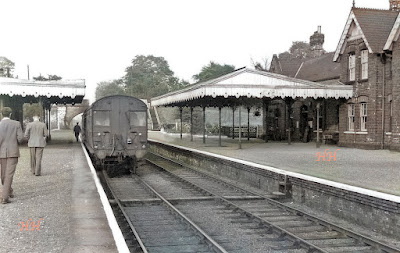 The second talk was to the Boothferry Family and Local History group which meets in the Courtyard in Goole. Here I  showed pictures of the shops of Goole. Many of the audience were born and bred in the town and they kept me right - most of the time! It is amazing how many shops there were - not only on the main streets but on the corners of the cross streets too.  And it was also interesting to see how businesses moved around the town  as shopping habits changed. For example I showed a picture of Keith Anderson's shop in Aire Street and another of his jeweller's shop at the top end of Pasture Road.
But a friend later reminded me that between those two he had a shop in Carlisle Street. Here it is where the Philips sign is on the right, opposite the Conservative club. 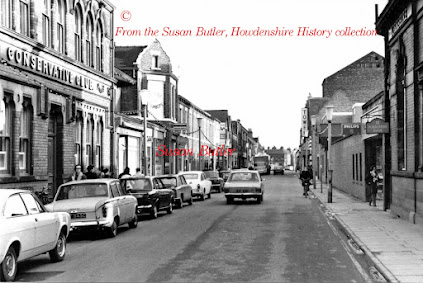 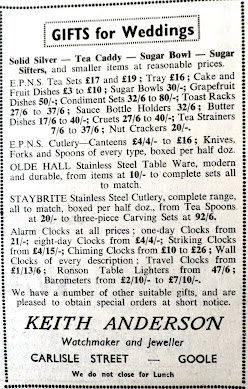 I have recently too been buying and copying pictures - mainly of Gilberdyke, Newport and Goole. I shall be showing some of the Gilberdyke views at the next meeting of the Gilberdyke WI but as ever I am happy to provide digital copies of my old pictures for a small charge.
Those of you on facebook do have a look at my new Howdenshire History facebook page. I intend to post pictures on it from around the area.

Posted by Susan Butler at Friday, September 17, 2021 No comments: