I am writing this post on Thursday morning and it is not raining.  This is so unusual that I feel the need to mention it!!! It has apparently been the wettest May on record and the grass in the garden is almost too long for the mower.  I hope the weather forecast is right and we are now in for some sunshine.  The gooseberries are filling out well and the garlic is flourishing - which cannot be said for one of my blackcurrant bushes which was eaten off at the stocking tops by a deer [ we saw it!]

The bees are busy  and we hope for a good crop of honey in the not too distant future. I am not the expert in the household but  know for certain that one of my garden plants that they seem very keen on is the large cotoneaster on the front of the house. I gave up working near it as there were so many bees on there the other day.

Last week I went to a concert in Howden Minster organised by the Howdenshire Music Project. We sat socially distanced and wore masks but it was live music and I was able to hear too the new Feurich piano. I shall certainly be attending the next one as my daughter Amy is playing!

I am asked all sorts of queries about the local history of the area. A recent correspondent wondered whether he could write about Goole as part of Howdenshire. Definitely not I replied - as a pupil of the old GGS I spent many hours looking at the letters WRCC - West Riding County Council - which were branded into the back of every chair.

Another query was about road rollers!!! This was because I have some pictures of five steam rollers  on top of the newly built Newport bridge over the canal in 1930. This bridge replaced the original 18th century one as the Howden to Hull road was then becoming increasingly busy.  It was tested before it was handed over to ERCC by 115 tons of  road rollers being parked on top. 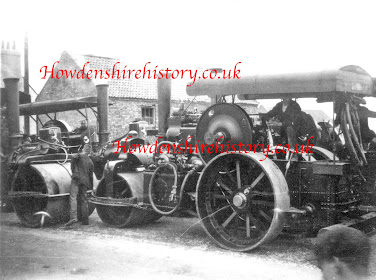 In the background of this picture is a building which was used a butcher's slaughterhouse. It was said to be conveniently situated as the blood could run straight into the canal!! It is now the site of Turks Head Gardens housing development.

Newport is as its name suggests a new village, built where the Market Weighton canal cut through the  5000 acre marshy waste called Wallingfen.

When the canal was dug it was found that there were beds of clay suitable for making bricks and tiles on its western side and soon there were several brickworks in operation. Now there are none. But in its heyday a vast amount  were transported on the canal. In 1823  it was said that there were between 1,700,000 tiles and 2,000,000 of bricks made there annually.

I have many Newport pictures - here are a couple. These date from about 1960. 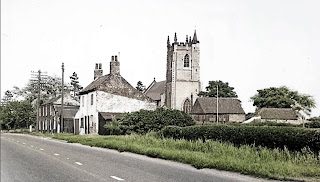 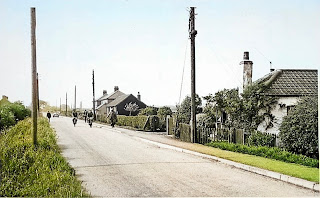