The leaves are coming off the trees in the garden and lying in a carpet on the ground. But I like walking on them and Molly likes snuffling looking for interesting hidden treasures! I have now had my booster jab and after a couple of days lying around drinking tea and doing little I now feel a little more secure going out and about.

Both the history groups I attend in Howden and Goole are having a break until January but that does not mean that we are stopping researching. Topics we have been looking at in Goole are doctors, the shops and businesses in Bridge Street and the Doyle Street mission chapel. Goole has always been ever changing and the Bridge Street area has within living memory changed from a mix of docks, shops and housing  to a largely commercial street.

I became interested in a lady who was the matron of Goole Bartholomew Hospital from 1927 to 1952. This began when I was looking through some pictures and came across this clipping from the Goole Times 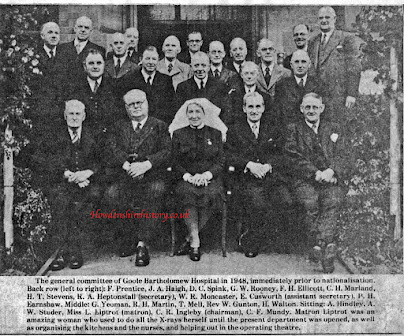 Sitting in the middle of a group of gentlemen in 1948 was matron Lucy Liptrot. And the caption told us that she was an amazing woman who used to do all the X rays herself as well as organising the kitchens and nurses and helping out in the operating theatre.
So I thought I would see what else I could find out about her. She was born in Pemberton in Lancashire in 1889 where her father was a grocer.
She trained as a nurse at Hope Hospital, Salford and  during the First World war she joined the Queen Alexandra's Imperial Military Nursing Service [QAIMNS] and served in England, firstly at Pembroke Dock and later at Southampton. She served from 1918 to 1919  caring latterly for flu victims and then in the reserves.
I was able to download her military records [all 51 pages of them] from the National Archives which presently offers free downloads.

She was a staff nurse at Northampton when she came to Goole in March 1927 to become matron at Bartholomew hospital. She never married and died in June 1952, having resigned as matron four months earlier due to ill health. Her funeral was at Liverpool with a memorial service being held at the same time at Goole Bartholomew hospital attended by doctors and staff. At a meeting of the Goole Howden and Selby hospital management committee that week Sir Harold Wilberforce Bell [of Portington], the chairman, paid tribute to her as a splendid woman beloved by all those with whom she came into contact.
I was surprised to find her in 1933 travelling on board a passenger ship to Malta and then back a few weeks later from Brisbane. When I looked more carefully there were soldiers and sailors and another  nurse aboard and can only guess she was perhaps asked as a reservist to do this. She gave her address then as Bartholomew Hospital, Goole, as incidentally she did on her death. It was her home.

Posted by Susan Butler at Wednesday, November 24, 2021 No comments:

Next week is Remembrance Day and  I thought I would write a post about John [Jack] Stather Sherburn who died on October 11th 1918, exactly the same day as his baptism in the Minster in 1896.

I have been looking at the history of Howden church bells and during my research I found a website listing local ringers who lost their lives in the First World War. There were three listed from Howden,

Private Robert Simms  who was killed on June 11th 1917. He was aged 26 and was from a large Howden family. John and Annie, his parents  had 13 children. Robert worked a waggoner in 1911 at Yokefleet and enlisted at Howden in February 1916. He was badly wounded by shrapnel on the Somme in August but recovered after a period in a military hospital in Kent. He returned to duty and served in Salonica where he was killed, being shot in the head and chest.

Private John Camp   who died on November 20th 1917. His parents ran a lodging house on Treeton. John was a stretcher bearer, who died in a military hospital in France aged 21. He was  carrying a wounded comrade when a shell burst  nearby, killing the wounded man and so severely wounding John that he died a few week later.

The third ringer to be killed was  Private Jack Sherburn. His parents were Joseph Alcock Sherburn a gardener and Mary Stather. Jack was one of seven children. His mother had died in 1906 and his father remarried Annie Arnell and a further six children were born.

Jack enlisted in December 1914 when he was 18.  He  was in the 5th East Yorkshire Battalion [cyclists] and was on coast duty until December 1916 when he was sent to France. He worked as a stretcher bearer until he was taken prisoner on March 23rd 1918. His father was pleased to receive a letter from him as until then the family had not known where he was.

As a prisoner he was employed behind enemy lines erecting light railways and in salvage work but he was then admitted to hospital in Valenciennes suffering from dysentery. He was then moved to ?Bellecourt where he died. The information, presumably from his family in the memorial book in the Minster says

These young men  have many local descendants and perhaps some can add further information.

Posted by Susan Butler at Friday, November 05, 2021 No comments: