It is a grey time of year but at least we were not flooded on Friday 13th. We received a flood warning from the Environment Agency and  went out to check the high tide on Friday evening but the Ouse was firmly where it should be.

I am often asked why half of Howden church is in ruins - was it Cromwell? was it a fire? I recently listened to a local radio discussion on this very subject where various theories were suggested so I thought it was maybe time to try to answer the question - although briefly.

There was a church at Howden in Anglo Saxon times and it is mentioned in the Domesday book of 1086. We know little about it although it is said that some of the stones from an earlier building were re-used in the present church.

Howden was given to the Bishops of Durham by William the Conqueror. In 1267 the church became collegiate which meant that many more priests were involved and more money was available. So a new church was begun. One of the priests, John of Howden [the prebendary of Howden and a former adviser to Queen Eleanor], foretold that what he had begun during his life he would complete after his death.

This prophecy came true a few years later when a miracle took place at his funeral Mass - he sat up in his coffin. The nave and chancel were soon completed but so many pilgrims flocked to John's tomb in the church that their offerings enabled the original roof of the church to be heightened only 50 years after it was built. Both rooflines can be seen from Howden market place.
Howden honours John with a street named after him - even though he was never officially a saint he was known as one.

But in the sixteenth century King Henry the Eighth broke from Rome and in the rearrangements that followed Howden church lost its source of wealth and became an ordinary parish church. The people of Howden who were responsible for, and worshipped in the nave applied in 1609 to close off the choir  as the tithe owners who had been granted the income previously used by the Prior of Durham to maintain it were not doing so. Both nave and choir roofs leaked and so Howden parishioners took lead off the choir to make their bit of the church waterproof.

There is a story that Parliamentarian solders on the way to Selby in 1644 stabled their horses in the nave, destroyed the new organ and carried off the pipes, blowing them as that passed by Wressle castle. This event was dramatised in a nineteenth century work of fiction but the basic story may well be true.

Meanwhile the weather did its work, water poured in and first the choir [1696] and then the chapter house [1750]  roofs collapsed. That is why we have the beautiful ruins today. It was not deliberate, it was not the work of Cromwell, nor the result of a fire.

Little was done to conserve the ruins until Victorian times when iron bars were used to strengthen the stonework. The nave was re- roofed in the 1850s and the tower floors removed.

In retrospect this was unfortunate as in 1929 the tower was set on fire and the flames quickly went straight up like a torch to the top of the tower and destroyed the ringing chamber, bringing the bells crashing to the ground.


Bostock and Wombwell's visiting circus was parked around the Market Cross and the wagons had to be quickly moved. They including caged lions and keepers walked alongside them carrying guns

The fire was  started by a gullible farmworker who was was persuaded by a disgruntled and recently sacked fair worker to set the church on fire.

The tower was badly damaged and  took three years to repair.

In 1971 the ruined part of the church was taken into the guardianship of English Heritage and the chapter house was reproofed in 1984.

This is a very  short summary but I hope it explains something of our church history.

Posted by Susan Butler at Wednesday, January 18, 2017 No comments:

Howden in the Middle Ages

Tomorrow my WEA history of Howden class restarts after the Christmas break and I am looking forward to seeing everyone again. We are beginning by looking at the history of Howden church.
So it seems appropriate to put here a link to a new website created by a member of the group.

The history of Howden in the Middle ages is both fascinating and upto now not as easy to read about as it might be. This new website, which is a work in progress, seeks to remedy this.

New members who are interested in the history of Howden are welcome to join the group. Send me a message through my website for details.


howdenshirehistory.co.uk
Posted by Susan Butler at Sunday, January 08, 2017 No comments: 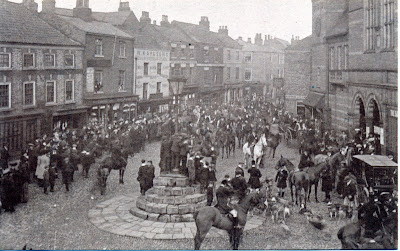