Poldark and the Eastrington connection

Many many years ago I had a pony and rode around the lanes of my home village of Eastrington. In June it was always- and still is- Eastrington Show. My father was for many years secretary and one of the most enthusiastic people involved was Albert Atkinson who lives on Eastrington Common.  His son, Mark always took part and has now made horses his career.

I gave up riding in my teens but I was reminded of all this last night when watching the new BBC adaptation of Poldark. For all the horses in the series are supplied by Mark who is now in business as Atkinson Action Horses

If you follow the links on the site there are lots of Poldark clips.

No sooner had I recovered from the Montague Mills exhibition than it was time to make the final arrangements for the First World War themed concert in Saltmarshe Hall.

Although the music and readings were all planned there were meetings of readers to organise, the programme to write and of course all the small details such as who would greet concert goers, did we have a bell to ring for the end of the interval and where should the displays be set up.

But finally all was ready. Saltmarshe Hall,  the concert venue is beautiful and we were delighted that the owners, Kate and Roland Whyte, had allowed us to use it. Kate kindly put up with our rehearsals and visits before the event and we could not have felt more welcome.

The evening came, the concert goers all arrived and soon the entrance hall and bar were crammed with what turned out to be a capacity audience.

And I think everyone enjoyed it. They listened to the readings and classical songs and sang along with some of the more popular choruses. You could have heard a pin drop during some of the most emotional and poignant parts of the performance.

Afterwards the bar remained open and we enjoyed a welcome glass of wine.

Below is a review of the concert which was published in the local newspaper, the Goole Times on Thursday, March 5th. It was written by one of the several musicians in the audience.

Last Friday’s “Keep the Home Fires Burning” concert in the beautiful setting of Saltmarshe Hall was an emotional and educational experience for the capacity audience.

The performance blended a wide collection of prose and poetry from the war, read eloquently by six guest readers with a selection of classical and popular songs of the period.

Readings ranged from a newspaper extract describing a Howden recruiting meeting in 1915, read by Neville Thompson, to a passage from the German novel All Quiet on the Western Front, introduced in German and read by Gudrun Wroot.

The stars of the evening, however, were Steven Goulden (tenor) and Amy Butler (piano) who ably rendered a wide range of music for the pleasure of their listeners.

Songs ranged from the pastoral The Water Mill by Ralph Vaughan Williams to the haunting Is My Team Ploughing? by George Butterworth, in which Steven’s mezzo voce rendering of the ghost was extremely moving. One of the most beautiful songs was To Gratiana Dancing and Singing by the lesser-known composer William Denis Browne, who was killed at Gallipoli in 1915.
But the audience was not left out and were invited to join in the choruses of Keep the Home Fires Burning, It’s a Long Way to Tipperary, Roses of Picardy and Pack up your Troubles, which they did with great enthusiasm.

Steven, who had a lovely rapport with his audience, introduced each song with an informed description of the composer and their relevance to the First World War.

Amy accompanied with great skill and sensitivity, and also gave an evocative piano performance of Butterworth’s The Banks of Green Willow.

The Goole First World War Research Group had set up a fascinating array of information and weapons in one of the rooms in the hall and there was also an illustrated display by local historian Susan Butler of old photographs of the war, including pictures of the damage done by the Zeppelin raid on Goole in August 1915.

A retiring collection was taken for the Royal British Legion and it is anticipated that a substantial sum has been raised. DB

The collection in aid of the Royal British Legion raised £396.89. Thank you to everyone who contributed.

Update: You can follow Steven and Amy as the Saltmarshe Duo on their own website or on Facebook:
www.saltmarsheduo.co.uk
www.facebook.com/TheSaltmarsheDuo
Posted by Susan Butler at Tuesday, March 03, 2015 No comments:

Well, I did know that February was going to be busy but I never imagined how busy. And here we are in March already.

The snowdrops are lasting well and are a beautiful carpet of white in the wood, interspersed with a few crocuses- although I think the squirrels eat most of the bulbs that I plant.

But I have hardly had time to appreciate them. Our week- long exhibition of old photos of Goole in Montague Mills was an overwhelming success. Although we did not keep an exact count of visitors we think we had over 1000. We jokingly said that every visitor found either themselves or a relative or friend on a photo on display and Gilbert Tawn and myself were kept very busy printing out copies.

The exhibition was held in the old Burtons' building and several reunions of former workmates took place around the display boards dedicated to the factory. 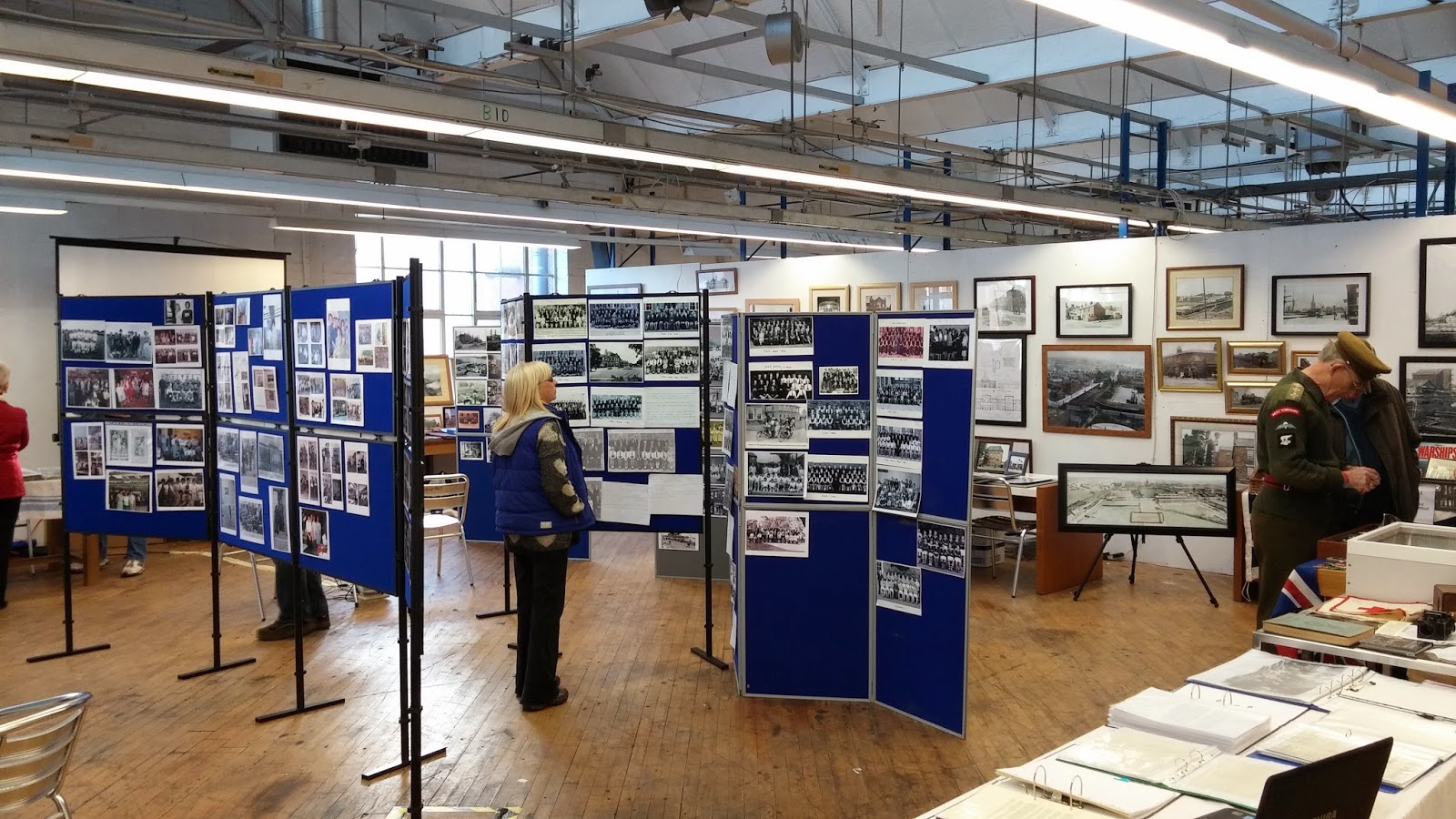 Above is a picture taken one morning soon after the exhibition opened. Later in the day it was too crowded to see across the room. In the foreground is the display by Chris Laidler and the Goole First World War research group and in the background the  beautiful framed and restored old pictures displayed by Pippa Stainton.