I think I have been overtaken by events over the last month and so this post is probably overdue. The garden has 'escaped' as every time I think I will cut the grass it rains and the bindweed has twined itself around everything, indiscriminately around flowers and nettles.

The good news is that we have now decided to let out our chickens and they are so pleased to be scratching amongst the grass and aforementioned weeds. We hope that this might cure them of laying soft shelled eggs as although they have access to plenty of grit it is not the same as pecking bits up from the garden. We have also put some cider vinegar into their water as we read this might help.

One of the reasons I have been busy is that I have been researching, writing and printing out a display on the history of music in Howden Minster. This is to coincide with a  Yorkshire Day concert in the Minster on Saturday 5th August given by Steven Goulden,  www.stevengoulden.co.uk a locally based tenor who is singing a variety of music ranging from the Howden Horse Fair song to Nessun Dorma.

He is accompanied by Amy Butler  http://www.saltmarsheduo.co.uk/about/ who will also be playing a piano solo entitled Souvenir de Sand Hall, written in the early twentieth century by F Reinhold Muller of Goole, for Mrs Scholfield of Sandhall.

I put the display up on Monday- it covers the medieval history of music in Howden, the grammar school, the organ, the 1929 fire and includes a lot of Minster choir photos. There is also a section on Steven's fund raising concerts in the Minster in the 1990s and on his grandfather John Goulden of Rawcliife who was a semi- professional tenor himself.

Interestingly most of the choir photos were loaned to me by Malcolm and Margaret Watson, former choir members. Margaret's father, Fred Swales, often sang in concerts in Howden Church with Steven's grandfather John.

While researching I was looking through the 1971 files of the Goole Times. I found a picture of Howden which I could not believe was taken then as it seems so timeless. 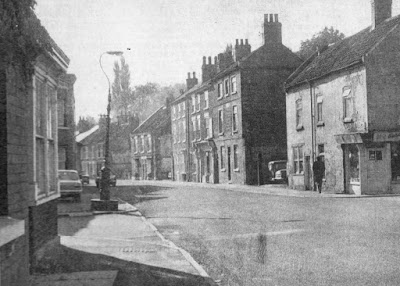 I also found in the same year an article about  the shoe shop on Pasture Road in Goole where I remember going to get my school shoes. This was run by the Misses Flower and I remember sitting on a sort of throne to have my feet measured. Then I was fitted for the sensible shoes which were part of the uniform at Goole Grammar. Black lace up for outdoors and brown flat shoes for indoors. Happy days!