I have been spending some of my time recently sorting out the archive of old Goole Times pictures which I possess, separating them into Goole, Howden, villages etc. It's  quite time consuming  but is  both a useful and interesting thing to do as social life is still very much limited. But given that I have a dog, cat and a small flock of greedy chickens and some lovely local walks it could be a lot worse.
I thought, having looked through so many pictures I would write something of the history of the newspaper in which they appeared.
The first edition of the Goole Times was published on August 1, 1853 by John Kay at offices in Bridge Street. Little is known of the early years of the paper and only Issue One has survived.
Soon after John Kay began his venture another newspaper began in Goole, the Goole and Marshland Gazette, founded in February, 1854 by Alfred Small in Aire Street.
The paper was issued monthly from Mr Small’s premises at 8 Aire Street and bound copies of these have survived, chronicling events in Goole from 1854 until 1870. Alfred Small sold out to James Mead Jillott from Manchester in September 1864 and retired to Laxton.
Meanwhile George Sutton, originally from Lincoln but who had served his time as an apprentice on the Doncaster Gazette, had arrived in Howden, where he ran a printing business and fancy goods shop at no 6 Market Place. This was a newsagent for many years - Stockills,  Holroyd and Asquith, Winns, Andrews and finally Chappelows.
On Saturday, September 5, 1863 the first edition of the Goole and Marshland Weekly Times was printed there by George Sutton, a bookseller. This was Goole’s first weekly paper although initially it was printed at Howden and taken across the ferry! A month later, on Saturday, October 3, a sister paper, the Howdenshire Gazette, was on sale. Both papers contained largely the same news but had different mastheads.
The Goole end of the business was initially run by Mr Sutton’s brother Charles in premises, between Ouse Street and Adam Street but then the brothers swapped towns and George moved to a shop first in Aire Street  and then at 3 Ouse Street.
The newspaper was printed first on a hand-operated Ingle press, although steam power was used later. By 1871 2,000 copies a week were being produced. Some of the printing was done in Ouse Street and some at George Street in Mr Hartmann’s warehouse, which had at one time been used as baths.
Mr Sutton’s health began to fail and he moved out of Goole to Cowick. In 1871 he sold the newspaper to Mr Henry Trevor Gardiner and moved first to Bilston and then to Canada, where he died. I have been in touch with the Sutton family who are still in the newspaper business in Canada.

Henry Gardiner from Wisbech where his father ran a newspaper, had just returned from three years in Ceylon working on the Ceylon Observer.
He was a man of great drive and was determined that his paper would thrive. He brought in three staff  who had been working at Wisbech -  John Hart Stevens (who joined the Goole Times in 1872 and was still there after 56 years in 1928), Mr W.H.Spencer and Mr S. Peck. In 1873 Mr Gardiner bought the title of the Goole and Marshland Gazette. 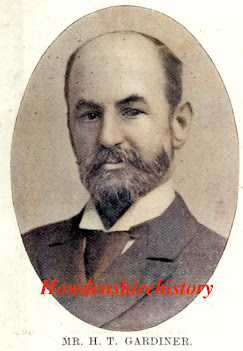 He acquired an existing printing plant which was over the Lowther hotel yard in Adam Street and changed his newspaper title from the Goole and Marshland Weekly Times to the Goole Weekly Times and then simply to the Goole Times. But he did not initially own the Ouse Street printing works which Mr Sutton had sold separately to Thomas Pearce.
He bought this from Mr Pearce and once again all the three businesses (retail shop, jobbing printing and newspaper production) were centred on Ouse Street. The house at no 3 was used as the printing office and a large room on the premises which had been used as the lodge for the Aire and Calder lodge of Freemasons (no 459) was also absorbed into the business.
Robert S Alcock joined the Goole Times as an apprentice on August 1st 1885. Writing in 1953 [after completing 68 years service with the firm] he described how the printing machines were in the cellars at Ouse Street, powered by a vertical boiler underneath Mr Pearson’s adjoining tobacconist's shop. The composing room was on the first storey with a dark circular stairway linking the two departments. There was a lift, consisting of a wooden case which enabled the completed pages [formes] to be lowered one at a time into the cellar for printing. He remembered the rope breaking on one occasion and a ‘printer’s pie’ of type falling to the cellar.
By 1891 the ‘Wisbech wizard’, as Mr Gardiner was known, decided to move on and  sold the Goole Times and the printing plant, to Robert Hudson (who was already in partnership with him in the jobbing printing business), Ferdinand Hartmann and G.W. Townend.
Mr Gardiner returned briefly to Ceylon after leaving Goole but then bought a newspaper at Bexhill on Sea.
The new owners formed the Goole Times Co. Ltd and soon after decided to move to a new site on Boothferry Road, which was initially leased from Ralph Creyke. The proprietors visited several newspaper offices to get ideas before building Times Buildings, [now Cancer Research] in 1894.
Not only were there commodious offices and a shop but bookbinding and jobbing printing departments. Behind was the main printing plant. In 1897 Robert Hudson retired to Dudley leaving Messrs Hartmann and Townend as sole proprietors.
The Goole Times celebrated its golden jubilee' in 1903 and its diamond jubilee in 1913, on both occasions producing souvenir editions which included full descriptions of the history of the area over the period.
In 1913 the company bought a Cossar press, a revolutionary machine which was fed with a large reel of paper on one end. The press printed it, cut the paper into pages, trimmed it, folded it, collated the pages together and delivered the newspapers out at the other end, counted into dozens. It was now possible to produce papers of 8, 10, 12, 14 or 16 pages.  Thirty-three staff were employed, producing the newspaper, printing booklets, handbills, account books, notepaper, ledgers etc which were all bound on the premises.
In 1913 Mr Reg Townend joined the firm but then came the war and several staff enlisted including Mr Townend who was wounded in September 1918 and was in hospital nearly two years, taking up his duties again in 1920.
In March 1928 the Goole Times Co bought the printing, stationery and fancy goods business of Mr W. Beal at 32  Market Place Howden shown below and it became known as the ‘Gazette office’ where jobbing printing continued for some years. 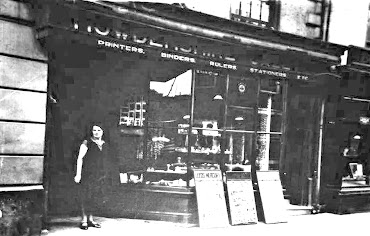 The last printers to use the printing equipment there including a  Columbian press at the back of the shop were Percy Jeeves and Ted Philpott. The press was later removed to the Beamish Museum. Mr and Mrs Ken Powls lived there for a time and local reporters used the office; Mr Norman Hains from Eastrington worked there. The Howden ‘Shugazet’ as most local readers pronounced it, was always an edition of the Goole Times although to its East Riding readers it had no connection with the West Riding Goole Times!
In June, 1969 the Goole Times Company was sold to Yorkshire Post Weekly Newspapers and this saw the end of newspaper printing in Goole.
However after various changes of ownership it is now again an independent title.
Posted by Susan Butler at Tuesday, November 24, 2020 No comments: