Suddenly it is early August and the garden is beginning to look autumnal. I have just been cutting the grass in the part of the garden where I hang out washing. Every so often my foot went into a soft patch of soil and the lawnmower balked. It is the moles which have returned. I do not really mind them but would prefer them to be elsewhere!

It is still very dry - the duckweed in the pond is brown and clinging to the damp part at the very bottom and when we were digging potatoes yesterday  they were much smaller than normal. Perhaps they would have benefitted from more water - and perhaps some old fashioned 'muck'.

But the apple trees are covered in fruit and the self sown brambles near the shed are soon going to  be ripe enough to be made into pies. I know that strictly speaking the bush is the bramble and the fruit  is the blackberry but as a child we always called them bramble pies and so I continue to do so.

Friends have been helping us convert an old brick workshop into somewhere to store historical objects and pictures. It has been hard work - although my contribution has largely been tea-making and enthusiasm as clutter has been removed, a floor laid and wiring put in to reveal a lovely building which has been long neglected.

Below is a picture of Molly who first appeared on this blog as a small puppy. Now two years old she is a good-natured and fairly obedient companion who likes nothing better than mooching around with us outside and trying to creep onto the settee in the house. 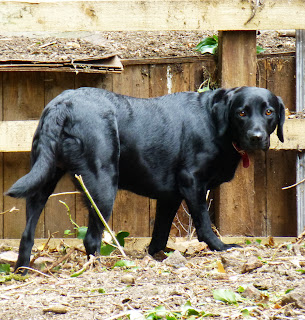