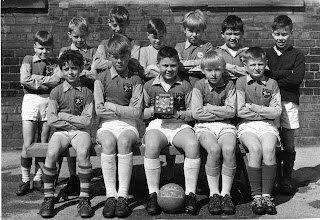 I hope that someone may be able to help me identify the people on these two photos of Goole Grammar School.
They were taken in 1940 and although I can recognise a few of the staff, it was quite some years later before I became a GGS pupil.

Don't forget that if you click on the picture it will enlarge so you can see the faces clearly.

I am always amazed at the connections which the internet enables us to make in matters of local history.

I recently received an email from Keith Johnson in New Zealand. He had come across the obituary on  my website for Captain Samuel Wright of Goole who died in 1897:

The obituary includes a mention of Captain John Moody. John Moody had married, as his first wife, Rebecca Lubbock, the only daughter of John Lubbock, a shipbuilder of Great Yarmouth.

Keith is a descendant of one of the sons of John Lubbock and  he has in turn been in touch with Harriet,  a descendant of another son, who lives  in California. She passed on to him a biography of Captain Moody which has come down through her family. She has given permission for this to be published.

Keith has written much more about the Lubbock family connection and Captain Moody on his blog:

However, he has kindly allowed me to include a copy of Captain Moody's life story here as well. He would be pleased to know anything else about Captain Moody's Goole connections.

Captain John Moody was born on December 13, 1801 in the City of York, York, England, where he attended school.  When he was about 15, he apprenticed as a sailor for 6 years.  At the age of 21 he became Captain.  On occasion, his ship needing repairs, he put in at the Port of Wells, Norfolk, at the shipyard of John Lubbock.

While there, he became acquainted with Rebecca Lubbock, only daughter of John Lubbock, to whom he became greatly attached, and in January, 1826 they were united in marriage.  In 1828 he took charge of numerous canal passenger boats sailing from York to Selby, John Lubbock, his father-in-law, having constructed these boats.

Afterward moving to Yarmouth, he became Captain of a schooner running to London called the Lawther ??[ Lowther].  In 1831 they moved to Wells, Norfolk and  he took charge of the “Good Intent”, a ship also constructed by John Lubbock and presented to his children, six sons and one daughter (the wife of Captain Moody).

He then took charge of the “Prinsula” for the precursor of the Oriental Steam Navigation Company (in part as a shareholder).

From 1844 to 1846 Capt. Moody supervised the construction of 3 steamers for the Spanish Government in the Philippine Islands (based in Manila) of which he became Commodore, again delivering them to the buyer. Leaving the ships, he returned home, visiting China, crossing the desert through the Suez Canal.

The camphor-wood trunk that is still owned by the family was brought from China through the desert on this voyage.  After reaching home, he again took ships to Russia and other countries.   When he was in Russia, Prince Gemticoff(?) gave a banquet in his honor.

He was the father of 10 children – 2 boys and 8 girls. In 1846 his wife died, leaving him with nine living children, one Robert having died in childhood.  His daughter Mary, the eldest at 17, took charge of the house, the youngest being 6 months old.  The other children were Rebecca, John, Ann, Grace, Hannah, Elizabeth, Julia and Matilda.

All lived under Mary’s care while her father was engaged in shipping and in foreign countries.  During his absence, his family took a house adjoining their Grandfather Lubbock at Wells, Norfolk, and upon Captain Moody’s return, they moved back to their London home.

His two little daughters, Hannah and Grace, died while he was abroad.  Later his daughter Elizabeth died, also his son John, after growing to manhood and becoming married in 1851.  His daughters Mary and Rebecca married.  Mary (Mrs. R. H. Emerson) went with her husband to America while Rebecca married Thomas Fryer

He then retired for a time to private life at London and Goole.

Not content with retirement, he constructed and commanded the “Empress” and “Majesty” steamers running from Hull to Goole.  He then developed new designs for several ships, including the lifeboat “Sea Refuge” and other ships that were commissioned by the US Government.

He then received a substantial order from the French Government to build 14 ships of his own design and construction.  When the government of France changed from a Kingdom to a Republic the order was canceled.

In 1852 he settled in America and invested in farming land in Wisconsin – Oshkosh, Elk Grove and surrounding countryside, also at Oberlin and Chicago, Illinois.

He then returned again to Goole, supervising the construction of more ships.

Captain Moody died at his house in Bridlington where his ironworks were situated, on March 5, 1872.

Rebecca Lubbock, only daughter of John Lubbock, shipbuilder and owner of shipyards at Wells.  She was the only daughter with six brothers.  She was married at Norwich Cathedral to Capt. John Moody Jan. 18, 1826.  Most of her married life was lived in London.  On Aug. 7, 1846 she was taken suddenly with erysipelas on on her face and died  on August 9, after 2 days illness, being 39 years of age.

Here is a fascinating piece of Goole's history which was written when Mrs Hannah Calvert died in 1934.  Mrs Calvert lived in Goole at a time when the town centre was in Aire Street and when Boothferry Road was a lane leading to the ferry over the Ouse at Airmyn.

Goole’s oldest inhabitant Mrs Hannah Calvert of 32 Carter Street Goole died on Monday evening at the age of 96.  Until a short time before her death Mrs Calvert enjoyed fairly good health and was in possession of every faculty. Her husband the late Mr Henry Calvert died nine years ago ---five years after he and his wife had celebrated their diamond wedding. They had a family of seven sons and two daughters of whom three sons and one daughter are living.
Before her marriage Mrs Calvert was Miss Hannah Drury daughter of Mr and Mrs George Drury of Swinefleet, and she was born in a house near the old mill at Swinefleet field. Her husband was born at Hailgate, Howden being the son of Mr and Mrs Thomas Calvert.
They were married at Whitgift parish church and first came to Goole seventy two years ago. At that time there was only one house west of the site where the market hall now stands and what is now the Stanhope dock was then a brickyard owned by Messrs Abel and Sutcliffe, the latter being the father of Mr John Sutcliffe, a former licensee of the Crown Inn, Ouse Street.
The docks were confined to the Barge dock, the Germany dock, the Ship dock and the Basin. so that vessels had to in and out through the old locks. Lock hill in those days was occupied by cottages while the railway station was in Aire Street.
Mrs Calvert’s husband who retired 33 years before his death occupied the position of stevedore, a position now filled by his eldest son Major T. Calvert M.B.E.. On his retirement the late Mr Calvert took his wife to Garthorpe where they farmed for three years and then to Reedness where they lived for the next fifteen years. In 1909 however they came back to Goole.
Mrs Calvert christened the S.S Faedreland at Hook shipyard in the year of her diamond wedding, and as a souvenir she was presented with a silver tray and tea service which bore the following inscription;-'Presented to Mrs H Calvert by the Ouse Shipbuilding Company Ltd Hook nr Goole, a memento of the launch of the S.S. Faedreland September 30th 1920'   Mrs Calvert’s second son, Mr Alfred Calvert, was managing director of the Ouse Shipbuilding company.

Here is a further selection of well-known people from Goole's past.

Here are some more old photos of Goole people who made news in the town. Do add any comments about them.

I have in my collection of old photos many of Goole people who have in the past served as local councillors, town officials, ministers etc. I am publishing some of them here in the hope that I can find out a little more about them and their contributions to Goole's history. Do please add your comments.

I already have information about some of them and would like to acknowledge the contributions of Gilbert Tawn, a keen local historian, who has provided reports from the old files of the Goole Times newspaper.

Marriage of Mrs Burniston in 1934

The vicar of Snaith (the Rev C.H. Moxley) was married in his own church on Tuesday to Mrs Edith Maud Burniston of The Lodge, Snaith. The wedding took place at 8am and was very quiet. The Rev R.N. D----e (vicar of Pollington) officiated.
Few people of Snaith knew that the wedding was to take place on Tuesday. When the engagement was announced on February 22nd last it was said that the wedding would take place during the summer.

Mrs Burniston has been a well-known public figure in the Snaith and Goole districts for a number of years. Her first husband Mr James Burniston died three years ago after practising as a solicitor for many years in Goole, Snaith and Thorne.
Mrs Burniston is perhaps best known locally for her work as an entertainer and in politics she is an elocutionist of considerable ability and in this direction has helped many local charitable organisations. Politically Mrs Burniston is a Conservative. In 1930 she was adopted as prospective candidate for the Pontefract division, but withdrew before the last general election. Her political activities are still however extensive, and she has been in great demand in various parts of the country, as one of the speakers attached to the Conservative Central Office.
The bridegroom has been vicar of Snaith since 1924 before which he held appointments in Doncaster, Leeds, and Sheffield Mr Mosley’s first wife, who died two years ago, was an invalid for many years

One of my projects this week has involved looking in more detail at the history of Selby. It has a beautiful abbey and stands on the River Ouse which has played such a large part in its development.  I remember in earlier days queueing to pay 4d [I think] to cross the toll bridge by car although today it is toll free. The bridge always felt very fragile and rattled horribly as you crossed.


Selby had the earliest railway station in Yorkshire, built in 1834 and was also a prosperous port until the opening of the Aire and Calder canal to Goole eventually took much of its river trade. 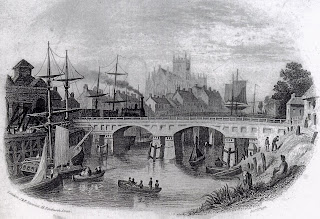 This charming drawing dates from 1842 and shows a train crossing the newly opened [in 1840] bridge across the Ouse, linking Selby by rail to Hull.
Posted by Susan Butler at Monday, July 11, 2011 2 comments: