It's the second of February - a month traditionally known as February fill-dyke. It is wet outside, our pond is full and the sky is glowering but it is winter and it could be worse. On the plus side our snowdrops are beautiful this year and some of the daffodils are in bud. Our eight chickens are laying well and the three beehives have survived the cold - although we are keeping an eye on them.

My two WEA history classes are going well although this term we are studying different topics. In Howden we are in medieval times and had a fascinating talk on Monday by a visiting speaker and ex- student about Howden around 1400.

I am also looking forward to a proposed archaeological dig at the rear of the new heritage centre, formerly the HSBC bank. The area was part of the Bishop of Durham's Lodgings and so should prove interesting.

In Goole we decided to look at Old Goole, a part of the town which has a separate identity and some very proud inhabitants. It even has its own Facebook page!

Many people seem to think that Goole popped up out of nowhere in the 1820s when the Aire and Calder Navigation Co. opened their canal and that there was little history before that. We are finding that the original Goole was thriving before the upstart New Goole and had a long history - although maybe not quite as illustrious as Howden's!

We are researching the histories and inhabitants of Goole Hall, Manor Cottage, Field House farm, Grove and Bleak Houses, the churches, chapels and schools. We are also trying to build a timeline of when the streets were built.

This week we looked at Field House Farm and its orchards and fruit growing past [anyone know anything about that?] and also at the original Old Goole School. It was held  in the old St Mary's Church and had some very well-read and enthusiastic masters. We think it was associated with the Hook and Goole Charity.

But by the 1870s it was being run as a National School  and was not in a good state. The blame  was laid at the door of the Vicar of Goole, Dr Bell.
In 1875  it was visited by Goole doctor Parsons in his capacity as Medical Officer of Health and other townsmen. A report in the Goole Times on 29th January 1875  describes the visit.

In the course of the report the state of the school and school-house were commented upon, the former being ill-ventilated ; the school yard needing draining and asphalting, while the house was low and needed ventilation. There was a case of scarlet fever there.
Dr. Parsons said the house was in a nice situation, but had no back windows, so that it was as badly ventilated as a back to back house. The Chairman said the master and his wife looked as if they were just recovered from some malignant disease. They were in an emaciated state, and looked exceedingly feeble.
The very poultry were huddled a corner of the yard which was a square piece of puddle, and looked too as if they were recovering from scarlet fever, although it happened to be a beautiful morning. There were 30 to 40 children in the room and the atmosphere was stifling.
Mr Bowers : Not a single window would open.
Dr. Parsons : I have spoken Dr. Bell about it, but he declines to do anything.
Mr. England: I cannot understand how he gets the Government grant. The Government inspector cannot know what he is about.
The Chairman : It no use setting this sort thing down to prejudice or saying we have any object to gain in making such a report. We have every wish to take a fair view, and cannot come to any other conclusion.
Mr. Bowers : It is a disgrace to any civilised town.
Dr. Parsons : Dr. Bell said it would cost too much; he should not do it. I will report to you again on the matter.
The Chairman : Thank you. Do not you think there should be proper playground ?
Dr. Parsons : There is a yard.
The Chairman : But it is one piece of puddle. You could not put children there.
Mr. Clegg : The school was very badly lighted.

The master, John Brayshaw wrote an indignant reply [which I have edited]

In  your last issue you gave a  report of the Church School, Old Goole in which they state that the school-house is low and badly ventilated.
This house consists of four rooms and scullery. The room on the floor is the living room  There are three rooms on the second floor, one used as a sitting room, the other two as bedrooms, the height of all three 8 feet 9 inches.  Each of these rooms has a window  fitted with sliding sashes opening both top and bottom.

With regard to the health of the first and second master I can  state that I am the only master of this school, and I don’t recollect being ill of any fever, contagious disease whatever, either malignant otherwise, and it appears to that if there was any malignity in the matter all, it must have been in the person who looked at  me and came to such a glaringly false conclusion ; but I thank God that I am in perfect health, notwithstanding the efforts of the medical officer of health to persuade me to the contrary.

On the day these people paid their unauthorised visit to our school  81 chiIdren were present and not merely 30 or 40 as was stated, and with regard to the ‘'stench”— not a very polite expression, by the way—l have no doubt that the person who said ho felt it, came strongly disposed find everything wrong, but we are not obliged  to consider his judgment the best in such matters.

As regards the School —It is certified to, by the Education department, as being equal the reception of 112 scholars. The ventilation by windows being considered dangerous from direct draught upon the children, there is a ventilator above, and grates all around the base of the school building, there is grate in the centre of the room, near the stove, from which comes current from the side grates, and with proper attention there can be no risk to health.

The yard has two drains one on each side, and the cause of the wet state which was then viewed by these people, was on account  of the late severe frost and afterwards wet weather, but was  remedied as soon as the weather became settled.

Every care has  been used in not allowing children connected with houses in which there were fever cases to attend at school.

To take any notice of the sensational remarks made about  my wife and the fowls would only give an importance to matters that they do not deserve. I would venture to say in respect to the medical officer, that I think little more experience of reality would be of great service him in his office.

I am, Sir, your obedient servant, JOHN BRAYSHAW, 3rd February, 1875. Master of the School.

John Brayshaw however did not stay much longer at Goole. He was originally a wool comber from Keighley and I think he probably returned there. I cannot find records of him in 1881 and wonder whether his health might really have not been very good.

The Old Goole Board schools were opened in 1878 and most Old Goole children would attend there. The National School remained open for a time and there was a new master, John Prentis by 1881. John was a widower with three adult daughters. He married at Goole later that year and by 1885 he too had left, to become the master of the Kell Bank school at Malham.


I must admit that reading about the schoolhouse it was probably a wise move!!! 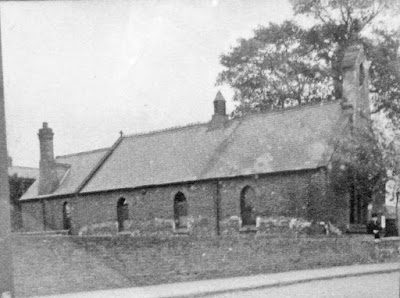 Posted by Susan Butler at Friday, February 02, 2018 No comments: