Howdenshire in the Domesday book

I recently received a message from a former Howden resident publicising a forthcoming exhibition at the British Library.  Opening on 18th October and running until February it is an exhibition of manuscripts  including the original and rarely seen Domesday book.

Of particular interest to us here in Howden is that the book will be open showing the page listing the ownership of the manor of Howden.

This is a great boost to the Howdenshire area as the Domesday book covers a large area of England and Wales and so  it is wonderful that we are singled out like this as the book features 13,000 places.

It is written in Latin and makes great use of abbreviations [ eg TRE meaning tempore regis Edwardi or  In the time of King Edward] but I thought I would put a version here online, based on my own notes that I have put together. I am not a Latin scholar so used the Phillimore edition which shows both the original and a transcript on opposite pages to show what we can learn from the local entry.

This is the Howden entry. I think you can identify place names and the word Dunelm [ Durham]  for example fairly easily 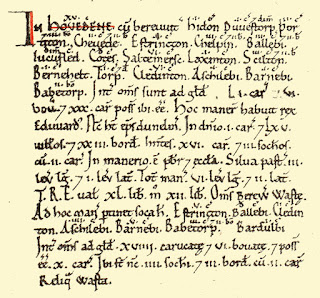 Land of the Bishop of Durham

In the lordship 1 plough; and 65 villagers and 23 smallholders who have 16 ploughs; 3 freemen with 2 ploughs. In the manor is a priest and a church. Woodland pasture 3 leagues long and 1 league wide. The whole manor 6 leagues long and 2 wide.

To the manor belongs the jurisdiction of these lands:
Eastrington 5c; Belby 0.5c Knedlington 1c; Asselby 4c; Barmby 5c; Babthorpe 3c and 2b; Barlby 1c.
Between them all 19 carucates and 6 bovates taxable; 10 ploughs possible.
Now there are there 4 freemen and 3 smallholders with 2 ploughs. The rest waste.

In Belby 1c and 6b taxable; 1 plough taxable. Muli had 1 manor there. Now the bishop has 1 smallholder there. Value before 1066 20s

Land of the count of Mortain

In Asselby Thorketill had 1 manor of 1 c taxable. The jurisdiction of this is in Howden. Nigel has there 1 man with 2 oxen and 5 fisheries paying 2,400 eels.

This is the basic entry - there is a little more in the claims section and the summary.
A league was twelve furlongs.  A furlong is 220 yards.

One  c is a carucate, from the word caruca meaning plough and was the amount a plough team of eight oxen could plough in a year.

A  b is  a bovate  and was the amount one ox could plough in a year or one eighth of a carucate.

It is difficult to translate this into acres as of course how much a team could plough depended on such local factors as the type of land. A bovate could vary between six and 30 acres and therefore a carucate anything between 48 and 240 acres.

Locally all of Howdenshire, which had belonged to King Edward, now belonged to the Norman bishop of Durham. The terrible retribution for Northern attacks on Normans  - ‘the harrying of the North’ [1069]  explains why a lot of Howdenshire was descibed as 'waste' and of less value than it had been.

But having been back in Norman times it's time to return to the present and take Molly for a walk in the autumn leaves.