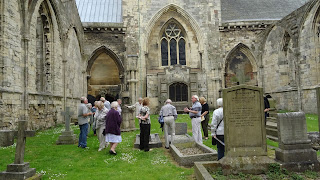 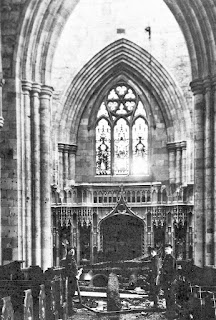 As I write the sun has come out after several days of heavy rain. It is good for the garden but the ground is strewn with leaves and twigs and the begonias which we are experimenting with growing straight into the soil are a bit beaten down.

It is election day and I have been to vote - it will be interesting to see the results tomorrow morning.

We are going next weekend to Eastrington Show where I shall put on a display of old photos and try to sell a few of my books on the history of the village. Sadly the village shop and post office where they were on sale closed a few weeks ago so for the first time for hundreds of years there is no shop in the village.

In my childhood there were two shops - Mr and Mrs Dove's and Mr and Mrs Holland's. Hollands' shop was I think bigger and I seem to remember there was a side room with extra goods on sale. My mother however tended to go to "Joan Dove's "as she had been at school with her and I was often sent to buy cooked meat for tea or paraffin for the heater in our kitchen. Harry Dove delivered newspapers and Mr Holland [Wilf?] delivered milk.

There was also a post office run by Arnold Hoggard, two butchers [ Lilleys and Rewcastles], Dennis Hanson's stamp business, a small library in the [old] village hall, a garage [ George Benson, then Joe Kendrick] and an off licence [Mrs Clara Betts].


I do not remember but I know that in the 1930s and 40s there were also two fish and chip shops,  the Cross Keys pub [ where the garage is now],  a joiner and undertaker [ my grandfather Robert Nurse and his brother Cliff]  a saddler and shoemaker [ Mr Ellis],  a sweet shop [ Stan Kay in an old tram] a blacksmith and a family in Amethyst House who baked bread.

Most villages the size of Eastrington were self sufficient although with two stations and an hourly bus service to Goole and Hull travel was easy.

But the show, always the third Saturday in June, has survived. This year our stall will be under cover and as well as books on the history of Eastrington, Howden, Goole and Saltmarshe we are selling jars of our Saltmarshe honey.


We hope to be busy but have time too to have a walk round and see old friends.