My friend Prudence Bebb, with whom I taught many years ago now, at Howden School, has recently published the latest in her acclaimed series of books on towns in Regency Yorkshire.

This volume, Regency Halifax,  deals with the woollen town of Halifax in Regency times. It looks at the lives of the people from  John Greenwood and Michael Pickles who were hanged for theft to  the Rawson family who were eminent bankers. The Rawson  family home and bank still exists in Halifax, now restored as Somerset House and available for weddings. 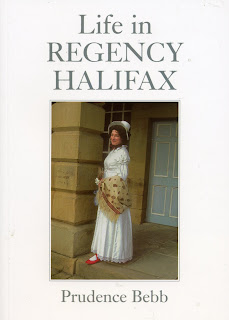