This weekend I visited a postcard fair at York racecourse. There must have been thousands of old postcards to look through and it was sometimes quite difficult to find which boxes to search. Goole, for example, is now in the East Riding of Yorkshire but for most of its existence it was in the West Riding of Yorkshire. Some stallholders put all Yorkshire postcards together and I now feel an expert on pictures of obscure North and West Yorkshire villages.

But I managed to find and buy some nice pictures of Howden, Bubwith, Blacktoft and Snaith. I was particularly pleased with an advertising card from Joshua Barrett who moved to Snaith in the 1890s. He sold embrocations and tonics under the name of Mandrake and his house is still known as Mandrake House. His trade mark was a strange amalgam of man and drake, the man supposedly being Joshua himself.

Of course, Mandrake root has long had associations with fertility and witchcraft and JK Rowling in her Harry Potter books makes use of the belief that the root screams as it is dug up.

Joshua was a farmer's son from Bluntisham near St Ives who had formerly lived in London. One wonders why he settled at Snaith. 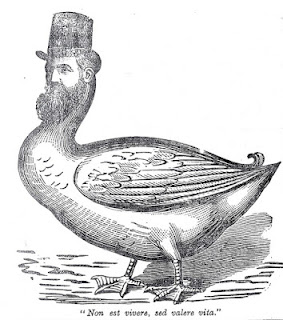 [The motto beneath the Mandrake logo is a Latin phrase which translates as "Life is more than merely staying alive".]
Posted by Susan Butler at Sunday, April 15, 2012