I recently saw a postcard of a ship on its side [ probably not the correct technical term!] in what was described as Goole shipyard. The date was given as  August 1931.

I looked up the event on an old newspaper site and found that it was a picture of the trawler Frobisher. She was a Goole built vessel, built by Goole Shipbuilding in 1919 for the Admiralty, originally being called the Benjamin Hawkins but launched as the Frobisher in 1920 as a steam fishing trawler.

She was sold to the Hudson Steam Fishing Company of Hull. In February 1931 she went aground off Iceland and presumably this explains why she was in no 3 dry dock back in Goole later that year being repaired. She was apparently being refloated and the props had been removed on one side when she suddenly tilted over. No one was injured but some men had to jump to safety.

Soon afterwards she was bought by the  Royal Netherlands navy and re named Fastnet Z101. She sank, possibly scuttled in April 1942 it is suggested to prevent her falling into the hands of the Japanese. 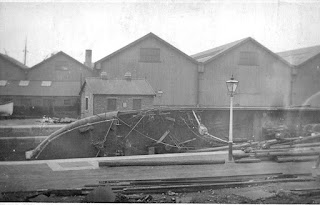 It has been the hottest day of the year so far today and my enthusiastic plans for lots of energetic weeding were shelved. But I have been watering the various pots and the tomatoes and peppers in the greenhouse. I have also been watching blue tits in two of our new boxes and the many house martins who come every year to build under our eaves. They bring mud from the river to build their nests.  So far we think we have 12 nests or being built nests. The blue tits are too fast for me to catch but I did get a picture of the martins.

I am looking forward to a good summer - I heard a cuckoo a couple of days ago and the bees are extremely busy. 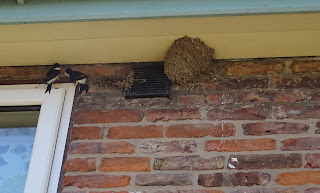