Another month has passed and we are still in partial lockdown - but  life still seems to be returning to a normal - we can shop, albeit with a mask on, we can go for a meal with a limited number of friends and invite a select few into the house and I managed a haircut.  Most of my friends have now had 2 jabs so we feel safer. And I was not planning a foreign holiday - so steady progress.

The season seems late and this week I have been hearing a cuckoo. According to the old rhyme it should have changed its tune by now and be preparing to fly away home.  We are harvesting spring onions and looking forward to rasps and new potatoes although pigeons ate my first sowing of pot turnips. I am going to concentrate on growing things in pots. That way I can control the weeds.

One of the topics I have been looking at recently has been Clarks Buildings in Old Goole. I was contacted by a lady whose grandfather James Smith was born there in 1888. His parents were Joseph Smith and his wife Sarah Jane, nee Goulden.

This was interesting as a good friend is a member of this family and when we looked carefully we found that Sarah Jane was one of the eleven children of James Goulden and his wife Sarah Drury. She was the younger sister of John Henry Goulden, my friend's great grandfather. The Goulden family is a large one and still well represented in the Goole area.

All the houses were built by the Clark family, the last of whom, Hannah,  lived in Prospect House [ see map]. They also built Bleak House. The extensive Clark  property was eventually put up for sale in 1891 having been bogged down in a Chancery court case.

When the shipyard moved to the Old Goole side of the Dutch River these houses remained in front of them but were probably demolished in the 1930s.  The furthest three, on the bend,  lasted longest and I remember visiting a school friend there whose father Edward Sammon worked at the shipyard. 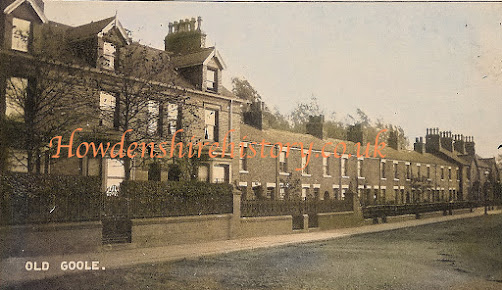 Any memories of this area of Old Goole and the families would be welcome
Posted by Susan Butler at Friday, June 25, 2021