In the WEA local history class I run in Goole - new members always welcome - we discuss all manner of subjects Goole related. This morning topics included the history of Fisons, once Goole Tillage, the role Lep played in the war assembling military vehicles and Stanley Oughtibridge.

I am not sure how we came to talk of him but he was one of Goole's characters. He was in fact from Swinefleet and began his career looking after lions in a circus. He then spent many years working in the music halls mainly in the north of England.

He was for many years a familiar figure in Goole, usually immaculately dressed and sometimes wearing spats. 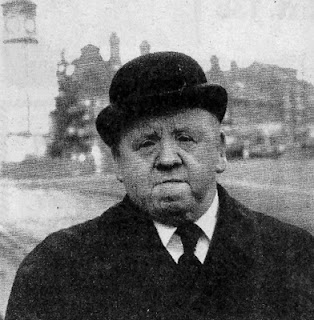 This picture of Mr Oughtibridge, taken in 1989, was provided by Gilbert Tawn.


On a different topic Molly the puppy is growing by the day. She is, like most Labradors, keen to eat almost anything including so far a plug off a lamp, a library book cover and any unwary feet. She is not sure whether to chase chickens or run from them but seems to take most new events in her stride. I only wish her day did not start quite so early!!
Posted by Susan Butler at Thursday, September 29, 2011