Yesterday was the last session of my Goole history classes before Xmas. We shall resume on Thursday 12th January 2012. It is a very friendly group and we study and talk about many aspects of Goole's history. It is amazing how much knowledge everyone has.

One of the students, Chris, has been studying the men whose names are on the Goole War Memorial and I thought it would be a good idea to publicise the work he is doing in the hope that even more information may be forthcoming. He writes:


'In October 2005 I started to research the 452 men named on Goole Cenotaph from the First World War. In addition to these men I also have references to approximately 300 other men who also lost their lives, but who at some time had connections to Goole.

At the time of writing, I have located over 70 Service Records relating to all of these men. I have also been fortunate that during the work on this project that people have allowed me copies of photographs and letters of men who lost their lives during the ‘Great War’.

One aspect of researching the names has been the reading and transcribing of numerous entries within the Goole Times that bear the names of men who were killed, not just during the War but also in the years after; the Commonwealth War Graves Commission cites the dates of 1914 – 1921 in relation to servicemen killed/died.

Items published by the Goole Times have also helped to assure that the man named on the Cenotaph and the CWGC record ‘match’, these being the ‘Roll of Honour’ booklet (July 1917) and the Almanacs for the years 1916, 1918 and 1919. The RoH and 1919 Almanac, as well as the written entry, also contain a number of pictures of some of the men.

With regard to those who are not named on the Cenotaph, this being a ‘family’ preference, not all of them were residents of Goole at the time they enlisted. Some were born here, later moving away, while others were born elsewhere and enlisted in Goole.

For example, two brothers, Fred and Arthur Moody, were both born and raised in Goole. Both spent time at sea, and while Fred remained in ‘home’ waters Fred was ‘paid-off’ from his last trip in Australia, whereupon he enlisted in the Australian Imperial Force. After their deaths their mother remained in Goole, yet neither is named on the Cenotaph. Having said that, two men named on the Cenotaph bear comparison – Walter Horsman, born and enlisted in Leeds, was for a time based in Goole, where he met and married a local woman; Herbert Farrow, born, employed and enlisted in Hull. Sometime after his death and before the completion of the Cenotaph, his wife and young daughter came to Goole and his name was included, though while he was alive he had no connection to the town.

While those men named on the brass plaques affixed to Goole Cenotaph can be viewed, those who are not named on it are no less important, therefore I would be grateful to anybody who can provide any information. 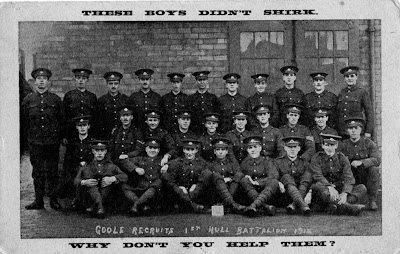