The Pepper family of Goole

Yet again it has been cold, wet and grey. There has been flooding in West Yorkshire and a local gardener I talked to said all his vegetables were just sitting in the soil, not growing and looking a bit yellow. So my garden is not alone in looking very sorry for itself.

The poor weather has meant I can spend more time on the computer. I have been researching a Goole family called Pepper who spent much of their life on Goole barges and billyboys.

George Pepper was born on a canal boat and after his marriage to Emma Ward in 1880 he worked variously as a boatman and as a dock labourer. The family were living at The Barracks on the road to Swinefleet in 1911.

George had a few brushes with the law being summonsed for poaching and for salmon fishing without a licence.

At least two of George's sons, Paul and John Henry, served in the army in World War One. Paul survived but John Henry was killed in 1918, just before the end of the war. He was awarded the Military Medal.

Chris, who has recently set up a blog on Goole men who were killed in the war, provided the following entry from the Goole Times.

Official news has been received of the death in action on September 18 of Sergt. John Henry Pepper, Manchester Regiment, of 21, Antis Street, Plymouth, son of Mr. and Mrs. G. Pepper, of 23, George Street, Goole.
Sergt. Pepper, who was 36 years of age and was well-known in Goole, had left the town some two years before he enlisted at the beginning of the war, and he had been out in France some three years. He leaves a widow and six young children.
Writing to Sergt. Pepper’s widow, his officer, Lieut. J.A. Corley, says:- “Please let me offer you my deepest sympathy in your sad bereavement in the loss of your husband. I saw him a few moments before he was hit. A more gallant or brave soldier I have never commended for his bravery. I had already mentioned him to my Commanding Officer, who promoted him to the rank of Sergeant and recommended him for a decoration. His death is a loss to the company and myself; we greatly appreciated his services, and his cheerful disposition was a magnificent example to us all.”
A brother of Sergt. Pepper, Pte. Paul Pepper, has just been discharged from the Army after being wounded five times and gassed twice. A brother-in-law, Mr. Chas. Abson, of 32, Gordon Street, is a minesweeper, and is at present in Russia.

In 1911 John Henry Pepper was in Dartmoor prison but nothing is known of why that was or indeed what happened to his family after the war.

George Pepper survived until his early 90s and in 1930 was featured in an article in the Hull Daily Mail as 'England's oldest boatman'. He claimed to have fathered 20 children and to have 100 descendants.

If you are one of them please get in touch! 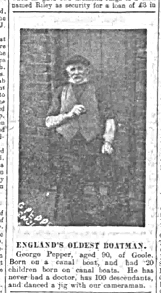