Barmby on the Marsh history

I am finding the history of Barmby on the Marsh fascinating at the moment. Whilst I have quite a lot of information on the village already, I am looking at it again and finding new material.

Situated as it is at the end of the road from Howden, not too many people nowadays know the village - but in earlier times most of those who lived there benefited from being both on the banks of the Ouse and at the start of the Derwent navigation.
There was a large weaving industry making sailcloth for the visiting vessels and many families were watermen, making their living from the river. There were ferries to both Drax and Hemingbrough and regular 'market boats' to both Hull and Selby.
The land around the village was not enclosed until 1853 and before this villagers had rights to graze on the Marsh - 'marsh gates' - and annual  horse races were held.
I have been looking at the mill or mills - I think there were two: a post mill outside the village and a smock mill in the village centre. I would like to know more of them.
So far I know that in January 1839  both Barmby mills were  blown down in a storm and that in 1851 Alexander Bell from Gilberdyke, John Cooke and Thomas Collins were millers. By 1861 Joseph Wood was a miller.
Barmby also had an inn called the Windmill kept by Thomas Johnson in the 1850s and in 1864 by William Jackson, who was fined that year for staying open too long.


In 1870 Joseph Fenton was refused a spirit licence for the the Windmill beerhouse as it was said that there were already four public houses for the 330 inhabitants in the village. 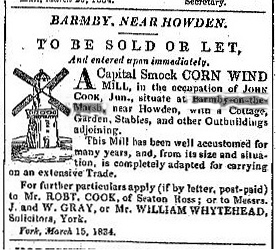