The re-naming of Staddlethorpe station

I have been looking through some files and have come across  a song, written by Gilberdyke teacher Mrs Jean Sellers on the occasion of the change of station name from Staddlethorpe to Gilberdyke in 1974.

To the tune of the Vicar of Bray, the Gilberdyke schoolchildren sang the following:


In Queen Victoria's golden reign
This station was first opened
And all the population round about
Approved the innovation.
For Goole, for Hull, for Doncaster
The people congregated
From Staddlethorpe they travelled far
With freedom long awaited.

But from this day, by one and all
Re-named shall be this station
As Gilberdyke it shall be known
Hurrah for this grand occasion.

Re-named shall be this station
As Gilberdyke it shall be known
Hurrah for this grand occasion.

After the singing, a contemporary newspaper report (February 1974) says the new sign was unveiled by local councillor Lewis Clayton and the old sign was presented to the parish council. Here is part of the cutting (click to view larger). I do have also some photos of the event which I shall eventually put onto the old photo section of my website but in the meantime if you were there singing, let me know!! 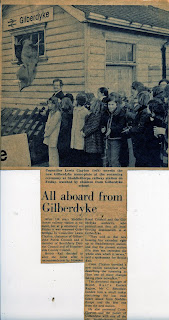