Here is an account of two golden weddings of Old Goole couples to add to the series of wedding reports which appeared in the Goole Times.

Both celebrated their golden weddings in  January 1931, as reported in the Goole Times:

Two Old Goole couples will celebrate their golden weddings during the week end. They are Mr and Mrs James William Plowes of 72 Swinefleet Road, and Mr and Mrs William Ounsley of 48 Moorland Road.

Mr and Mrs Plowes were married by the Rev Dr Bell at Goole Parish Church on January 18th 1881. Both are natives of Goole, and Mr Plowes who is 75 claims to be the oldest man in the South Ward.

Mrs Plowes is 72 and is the daughter of the late Captain Wood of Goole. They have had nine children three sons and six daughters (eight of whom are living) and six grandchildren. A tailor by trade Mr Plowes retired five years ago. He is a keen sportsman and takes a keen interest in cricket and football. 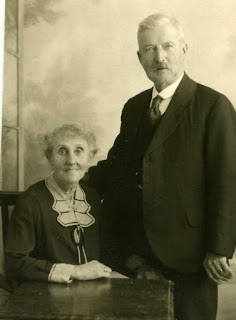 Mr and Mrs Ounsley were married at Snaith Parish Church on January 17th 1881 and at the time they lived at Swinefleet. Mr Ounsley was born at Weeton Lock [Weighton Lock], and has been employed as a docker by Messers France Fenwick for nearly 45 years. They have five daughters and two sons living, 28 grandchildren and two great grandchildren. They have lived in Old Goole for 45 years Mr Ounsley is 70 years of age and his wife, who was formerly Miss Anna Jane Armitage is 69.

Mr Ounsley recalls that the day before his wedding he walked across the Ouse which was frozen and the next day the ice broke after many weeks of frost.
Posted by Susan Butler at Sunday, June 12, 2011